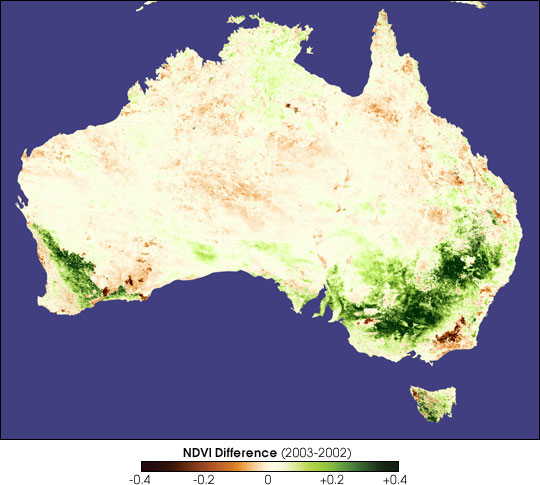 While winter approaches the Northern Hemisphere, Australia is welcoming a productive spring growing season. In 2002, drought kept crop production well below average in many parts of the country, but in 2003, much of the country is on track for a record or near-record grain harvest.

Satellite images of vegetation greenness are a comprehensive and consistent way to track growing conditions of both natural vegetation and crops. By comparing the ratio of different kinds of energy reflected back to the satellite by the Earth’s surface, scientists can tell where there is more or less vegetation: vegetation absorbs most visible wavelengths of light and reflects infrared.  Scientists call that comparison the Normalized Difference Vegetation Index, or NDVI. This image shows a satellite-based vegetation map comparing September 2003 to September 2002, and is made from data collected by the Moderate Resolution Imaging Spectroradiometer (MODIS) on the Terra satellite. Deep green values show where vegetation was lusher this year, and brown values show where it was less lush.

Large areas of deep green in both the East and the West reveal where this spring’s vegetation is rebounding from last year’s drought. In fact, according to news reports, Western Australia (left) is expecting a record 14-million-metric-ton grain harvest, while Victoria (southeast) and South Australia (to the west of Victoria) are expecting their second largest harvest on record. Even with most areas benefiting from the end of the drought, pockets of lower-than-last-year vegetation exist near the southeast coast at the border of Victoria and New South Wales (to the north). This is the Australia Capital Territory region around the city of Canberra—a region that was devastated by wildfires in early 2003.

Image by Reto Stockli, NASA Earth Observatory, based on data provided by the MODIS Land Science Team at NASA GSFC