First Big Snow in the East 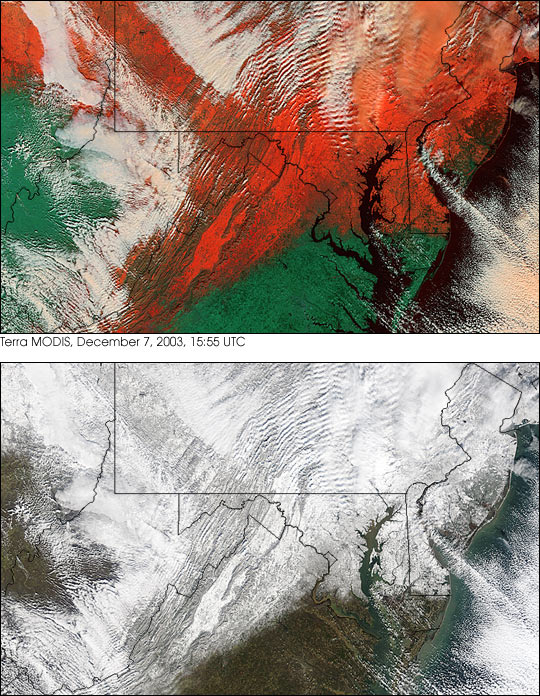 A winter storm packing a one-two punch charged out of the Mid-West and into the Mid-Atlantic and Northeast between December 4 and 7, 2003, dumping the first big snow of the season on the Eastern United States. As much as three feet of snow fell in parts of the northeast, with lesser amounts spread across the Mid-Atlantic.

This pair of images shows the snowy trail left by the storm across (top row, left to right) Ohio, Pennsylvania, New Jersey, and New York; and (bottom row) West Virginia, Virginia, Maryland, and Delaware. The images were captured by the Moderate Resolution Imaging Spectroradiometer (MODIS) on the Terra satellite on December 7, 2003.

The top image scene combines the sensor’s observations in the infrared and near-infrared parts of the electromagnetic spectrum with observations in the visible (the part our eyes can see) to better separate clouds from snow. Snow appears red, snow-free ground appears green, clouds appear peach, and water is black. The bottom true-color image looks more like what would be natural to our eyes.

Image of the Day Life Unique Imagery Snow and Ice

Snow stretches from the English Channel north under a bank of clouds near the Scottish border in this photo-like image of England, taken on February 4, 2009.

For the first time since 1918, snow fell in Buenos Aires, Argentina, late on July 9, 2007. The snow was still there the next morning when the Moderate Resolution Imaging Spectroradiometer (MODIS) flew over on NASA’s Terra satellite at 10:55 a.m. local time.

First Blizzard of the Season in the U.S. Midwest