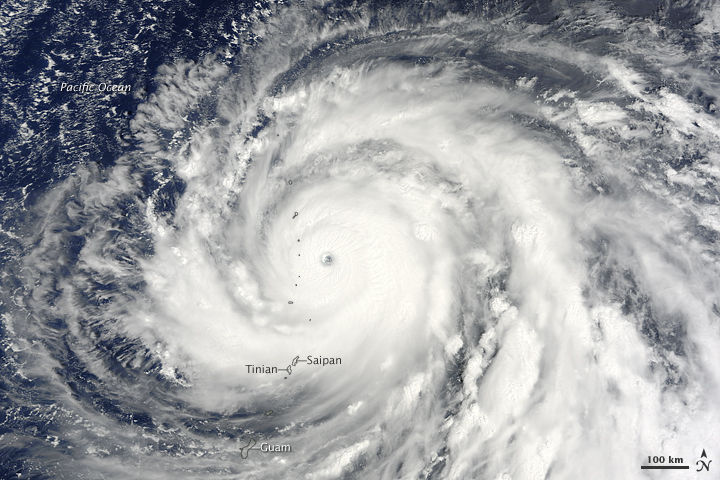 Super Typhoon Choi-wan had just become a monstrous Category 4 super typhoon on the morning of September 15, 2009, when the Moderate Resolution Imaging Spectroradiometer (MODIS) on NASA’s Terra satellite captured this photo-like image. Choi-wan is a perfect circle with bands of clouds pin-wheeling around the dense center. The dark blue surface of the Pacific Ocean is visible through the clear eye, which is defined by a towering wall of clouds.

At the time the image was taken, Choi-wan had sustained winds estimated at 230 kilometers per hour (145 miles per hour or 125 knots), according to the Joint Typhoon Warning Center. Choi-wan was strengthening. Twenty-four hours later, the storm reached Category 5 status with sustained winds of 260 km/hr (160 mph or 140 knots). The Joint Typhoon Warning Center expected the storm to intensify a little more.

While the storm raked across the Northern Mariana Islands and was targeting the small islands of Iwo To and Chinchi Jima, it was not forecast to hit any major land mass. In this image, Super Typhoon Choi-wan is centered over the northern arc of the Mariana Islands in the western Pacific Ocean, with the larger islands of Guam, Saipan, and Tinian located on the southern edge of the storm. The islands north of Saipan are volcanic and are either unoccupied or sparsely populated.

The large image provided above is at MODIS’ maximum resolution of 250 meters per pixel. The MODIS Rapid Response System provides the image in additional resolutions.

Choi-wan is a perfect circle with bands of clouds pin-wheeling around the dense center in this photo-like image from September 15 2009.

Super Typhoon Choi-Wan reached a dangerous Category 5 status as it tracked northwest across the western North Pacific Ocean in mid-September 2009.