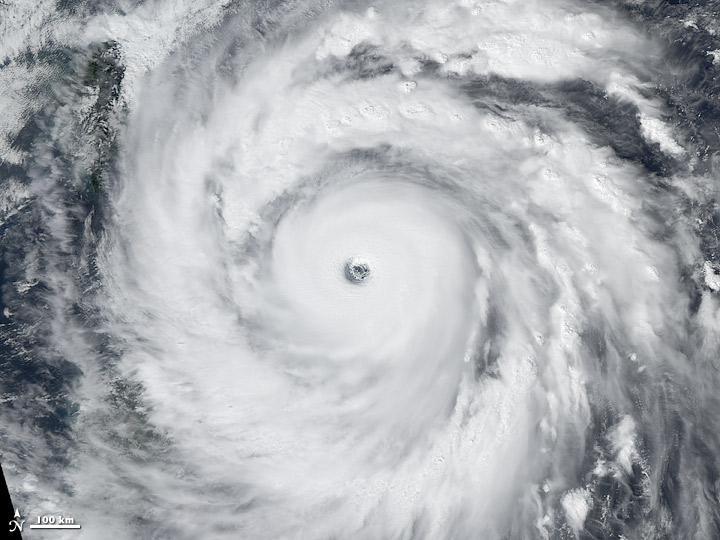 Cyclone Nargis, which killed tens of thousands of people when it struck Burma (Myanmar) in May, was more devastating, but the title of “strongest storm of 2008” goes to Super Typhoon Jangmi, shown in this image from the Moderate Resolution Imaging Spectroradiometer (MODIS) on NASA’s Aqua satellite from September 27, 2008. The image comes from the Earth Observatory’s new World of Change: Severe Storms feature, a collection of images of the strongest storm each year from the past decade.

Seen from space, even a super typhoon seems more beautiful than dangerous. The 50-kilometer-wide eye of Jangmi is encircled by a smooth disk of clouds. Bands of clouds swirl gracefully into the low-pressure heart of the storm. The smooth cloud band north of the eye is studded with thunderstorms.

On the ground, Jangmi was less lovely. It came ashore on northeastern Taiwan (pictured at upper left of the image) as a Category 4 typhoon, and torrential rains led to floods and landslides. With maximum sustained winds of 260 kilometers per hour (162 mph), Jangmi was not only the strongest storm in any ocean basin in 2008, it was also the only storm to reach Category 5 strength anywhere in the world that year.

NASA image by Robert Simmon and Jesse Allen, based on MODIS data. Caption by Rebecca Lindsey.

Seen from space, even a super typhoon seems more beautiful than dangerous. This image of a graceful-looking Typhoon Jangmi was captured on September 27, 2008, as the storm approached Taiwan.