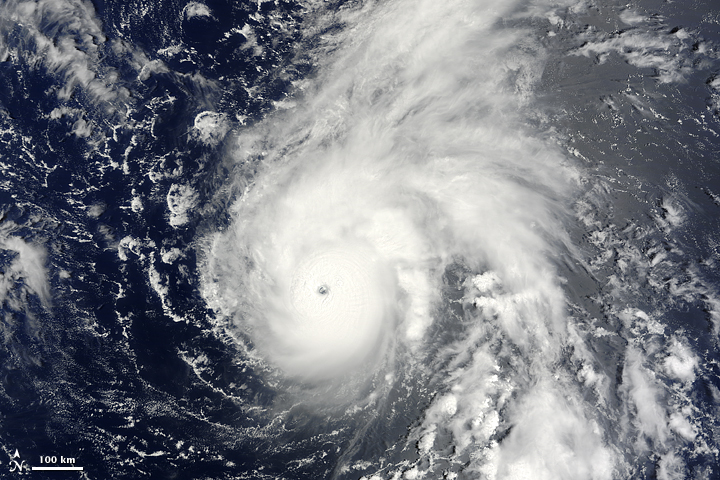 Well away from land, Typhoon Vamco moved north over the Pacific Ocean on August 20, 2009, gradually building steam. When the Moderate Resolution Imaging Spectroradiometer (MODIS) on NASA’s Terra satellite captured this image at 00:05 UTC, the storm had sustained winds of 195 kilometers per hour (120 miles per hour or 105 knots), according to the Joint Typhoon Warning Center. Forecasters expected the typhoon to continue to strengthen into a Category 4 Super Typhoon by August 21. The storm was not expected to hit land.

In this photo-like image, Vamco is clearly well-formed. It has a small, distinctive eye defined by a wall of clouds. The bands of clouds that spiral out from the eye form a tight, symmetric circle, another sign of a powerful storm.

Typhoon Vamco has a small, distinctive eye defined by a wall of clouds in this photo-like image from August 20, 2009.

Typhoon Vamco built into a powerful storm as it tracked north across the Pacific in August 2009. By August 25, it was weakening as it headed northeast.

Acquired October 16, 2009, this true-color image shows Typhoon Lupit spanning several hundred kilometers as it hovers over the Pacific Ocean east of the Philippines.

Typhoon Rammasun was an impressive Category 4 storm, making it a super typhoon, when the Moderate Resolution Imaging Spectroradiometer (MODIS) on NASA’s Terra satellite captured this image on the morning of May 11, 2008.

Acquired October 1, 2009, this true-color image shows Typhoon Parma headed westward over the Pacific Ocean. Outlined in black in the left half of the image are parts of the Philippines.