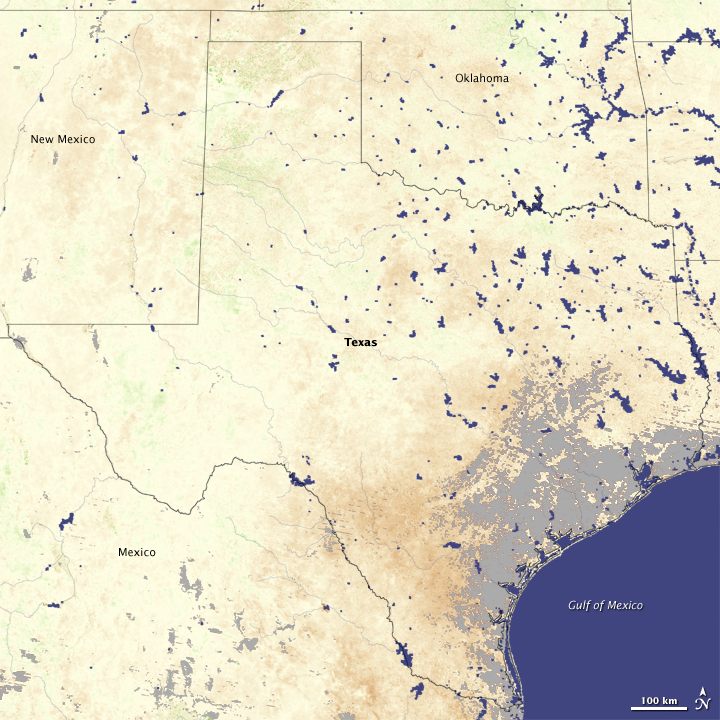 It may not be sudden and dramatic like most natural disasters, but drought is just as devastating. Drought withers crops and shrinks rivers, lakes, and reservoirs, affecting agriculture, transportation, recreation and tourism, forestry, and energy production. The National Drought Mitigation Center estimates that damage inflicted by drought amounts to $6-8 billion per year in the United States. It is the most costly natural hazard.

In the summer of 2009, the region of the United States most affected by drought was southern and central Texas. The U.S. Drought Monitor classified the drought in Texas as exceptional or extreme, the two highest classifications for drought intensity. According to the Wall Street Journal, the drought had caused $3.6 billion in crop and livestock losses as of July 28.

Most of Texas is brown in this image, revealing the negative impact drought had on plants. Missing data along the coastline is gray; clouds covered this region during most or all of the satellite overpasses during the observation period. While the clouds may have brought some rain, drought conditions still prevailed, said the U.S. Drought Monitor.

Unusually high temperatures have increased the impact of the intense drought, said the Wall Street Journal. Many cities, including Houston, Dallas, Austin, and San Antonio, implemented water restrictions as water levels in reservoirs and aquifers dropped.