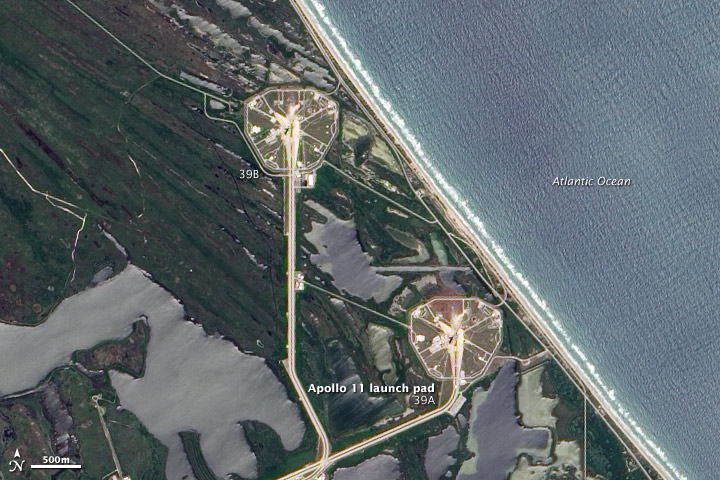 “I believe that this nation should commit itself to achieving the goal, before this decade is out, of landing a man on the Moon and returning him safely to the Earth,” President John F. Kennedy told a special joint session of Congress on May 25, 1961. Before the decade was out, on July 16, 1969, more than a million tourists gathered to watch the launch of Apollo 11, and millions more around the world watched the event on television. At 9:32 a.m. Eastern Daylight Time, Neil Armstrong, “Buzz” Aldrin, and Michael Collins began their journey to the Moon.

Apollo 11 lifted off from launch pad 39A at Cape Canaveral, a headland along Florida’s Atlantic coast. On June 9, 2002, the Advanced Land Imager (ALI) on NASA’s Earth Observing-1 satellite captured this true-color image of launch pad 39A and neighboring pad 39B. Both launch pads sport networks of buff-colored roadways dissecting marshy fields. At the center of each launch pad, roads converge and support buildings cluster. Outside the launch pads, vegetation is deep green, thanks to the warm, humid local climate. Sunlight bounces off the rippling waves of the Atlantic Ocean, and illuminates the relatively smooth surfaces of the inland water bodies on the cape. A white wave breaks along the cape’s shore.

By launching from the east coast of Florida, NASA took advantage of both geography and physics. Rockets could aim eastward and fly over the Atlantic Ocean, far away from heavily populated areas should anything go wrong. And within the continental United States, Florida is closest to the Equator. Launching from a locality close to the Equator enables the rocket to harness Earth’s orbital energy to boost its own trajectory.

In mid-July 1969, the Apollo 11 astronauts left the pull of Earth’s gravity aboard a Saturn V rocket. Developed at Marshall Space Flight Center, the three-stage rocket was taller than a 36-storey building, and weighed 3,817 tons. All together, the rocket’s internal components—including gauges, sensors, switches, pumps, and fuel lines—numbered three million, and each piece had to work dependably. Spectators who assembled near Cape Canaveral (then named Cape Kennedy) felt the ground shake seconds after the rocket cleared the launch pad tower in a burst of flame and smoke. The first and second stages of the Saturn V sent the command module into a low-Earth orbit in less than 12 minutes. Two and a half hours later, the third-stage rocket placed Apollo 11 on its path to the Moon.

By launching from the east coast of Florida, NASA took advantage of both geography and physics.

To mark the 30th anniversary of the Apollo 17 mission and the famous “Blue Marble” full Earth image, Goddard Space Flight Center’s Visualization and Analysis Lab has rendered a new visualization inspired by the mission.

Our Reach Should Exceed Our Grasp

Astronauts on the last voyage of the space shuttle Columbia captured this view of clouds over the Atlantic Ocean.