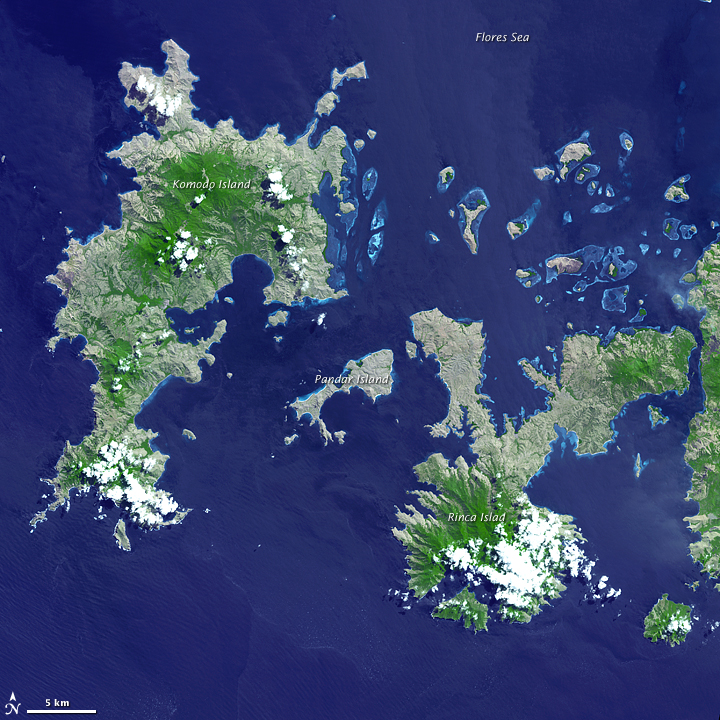 Established in 1980, Indonesia’s Komodo National Park includes three large and many small islands in Indonesia’s Lesser Sunda Islands. Initially planned to protect the Komodo dragon species, the park’s aims expanded to encompass protection of the area’s terrestrial and marine habitats in the context of a rapidly growing human population. In 1986, the park became a World Heritage Site of the United Nations Educational, Scientific and Cultural Organization (UNESCO).

The three largest islands in Komodo National Park are (from west to east): Komodo, Padar, and Rinca. Together with smaller islands, the park’s land area totals roughly 600 square kilometers (230 square miles). The islands are volcanic in origin; the underlying juncture of the Sahul and Sunda continental plates has caused volcanic eruptions and uplift of coral reefs. The terrain is rugged and hilly, and what little flat land exists in Komodo occurs primarily along the shorelines. Affected by monsoonal rains, the island group sees little or no rainfall for roughly eight months out of every year.

Komodo dragons (Varanus komodoensis), for which the park was initially established, are the world’s largest living species of lizard. (Besides Komodo National Park, some Komodo dragons also live on the neighboring islands of Flores, where the big lizards once cohabitated with small people.) On average, adult Komodos weigh 70 kilograms (154 pounds). Gifted with keen eyesight, strong jaws, steak-knife teeth, and toxic saliva, they are formidable hunters. Komodos can sprint up to 20 kilometers (13 miles) per hour, but they generally rely on stealth more than speed.

This image shows the islands of Komodo National Park in the Lesser Sunda Islands, on July 20, 2000.

Acquired June 24, 2007, this natural-color image shows the eastern half of St. John Island in the U.S. Virgin Islands. The area pictured incorporates a national park and national monument.

Maps of the underwater topography reveal reefs and sandbars within the largest marine park in the U.S. National Park System.