Dust Storm over Sudan and Ethiopia 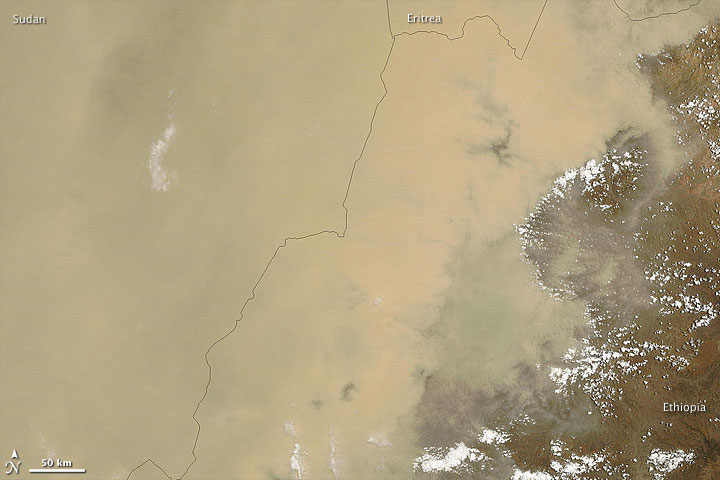 On May 11, 2009, dust continued to hover over central Sudan and to spread into neighboring countries to the east: Eritrea and Ethiopia. The Moderate Resolution Imaging Spectroradiometer (MODIS) on NASA’s Terra satellite took the top picture on May 11. For comparison, a clear-sky view of the same area appears in the bottom image, acquired on April 23.

In the image from May 11, opaque dust fills much of scene, but relatively clear skies prevail along the dust plume’s eastern edge. Over northern Ethiopia, the dust plume encounters a cloud-fringed air mass. East of the cloud fringe, thin dust plumes and small clouds collectively form parallel lines running east-west. North and south of this air mass, the dust plume’s borders appear less distinct. The dust completely obscures Ethiopia’s T’ana Hayk (Lake Tana), which is visible in the image acquired on April 23.

Later in the day on May 11, 2009, MODIS on NASA’s Aqua satellite observed this dust storm blowing eastward over the Red Sea. That image is available from the MODIS Rapid Response System gallery.

Opaque dust fills the skies over central Sudan on May 11, 2009, and spreads into neighboring countries to the east. Along the eastern edge of the dust plume, relatively clear skies prevail.

A massive dust storm hovered over Sudan and neighboring countries in early May 2009.

The dust that blew toward Cyprus from the coast of Turkey on the previous day stretched and thinned on August 26, 2008.

A dense cloud of dust hangs over the South Pacific Ocean off Australia’s east coast in this true-color image from October 14, 2009.

A massive dust storm spans central Sudan and stretches into the Central African Republic on May 9, 2009.