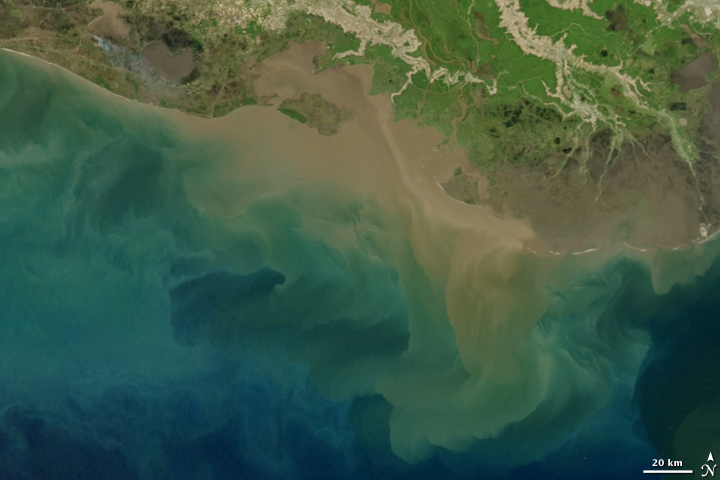 Sediment-laden water pours into the northern Gulf of Mexico from the Atchafalaya River in this photo-like image, taken by the Moderate Resolution Imaging Spectroradiometer (MODIS) on NASA’s Aqua satellite on April 7, 2009. The springtime river plume is distinct in the sediment-laden coastal water, turning the water the color of land. The tan gradually fades to clouds of green and blue as the sediment disperses. The Atchafalaya is a distributary of the Mississippi River, a channel of the river that drains into the Gulf of Mexico west of the main channel.

The plume is most distinct in the spring, when rains and melting snow wash over the central United States and flow through the rivers of the Mississippi River basin. On its way into the Mississippi, the water lifts millions of tons of soil from the farms that feed us. Historically, when springtime flooding swelled rivers, the sediment they carried resettled over the flat land near the river. Such seasonal floods left behind richly fertile farmland.

However, floods are also destructive. According to the U.S. Geological Survey, floods caused more loss of life and property damage than any other natural disaster in the 20th century. To reduce the impact of flooding in the United States, levees have been built along the flood-prone rivers in the Mississippi basin, preventing the river from widening during spring floods. While the levees prevent flood damage, they also stop soil and other contaminants from settling out of the water. Instead, high concentrations of soil, fertilizer, other nutrients from farms, lawns, and sewage treatment plants pour into the northern Gulf of Mexico.

The infusion of nutrients into the Gulf fuels large phytoplankton blooms, dense blooms of plant-like algae that grow in sunlit waters at the ocean’s surface. As the plankton die and decompose, they deplete the water of the oxygen that animals need to survive, creating a large dead zone in the northern Gulf.

Acquired May 17, 2011, and May 22, 2011, these natural-color images show sediment in the Gulf of Mexico, one consequence of Mississippi River flooding.

The river drains water and sediment from 31 U.S. states, delivering both to the Gulf of Mexico via the Atchafalaya and Mississippi River deltas.