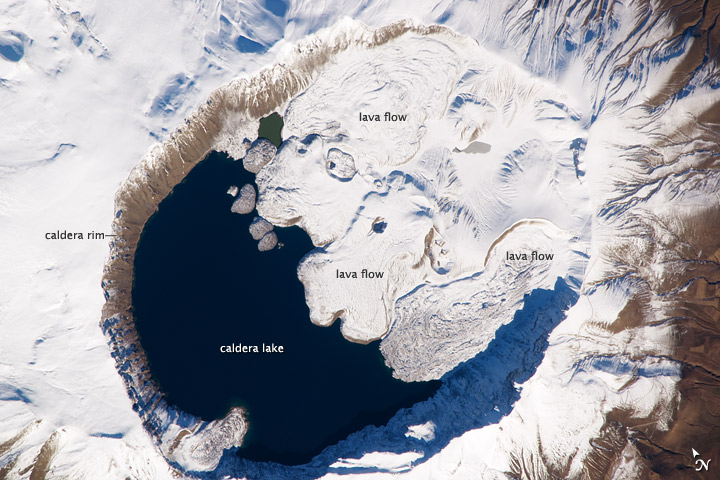 This detailed astronaut photograph centers on the summit caldera of Mount Nemrut (Nemrut Dagi in Turkish), a stratovolcano in the eastern Anatolia region of Turkey, along the shoreline of Lake Van. Winter snow blankets the 2,948-meter (9,672-foot) summit of the mountain, highlighting the brown caldera rim. (A caldera is a large crater, usually circular or elliptical, formed when the underlying magma chamber empties rapidly.)

The snow also highlights the irregular shape and wrinkled surfaces of several lava flows present in the eastern portion of the caldera. Lava flows associated with Mt. Nemrut range in composition from thin, fluid basalt to thick, glassy obsidian. A cold-water caldera lake occupies the western half of the summit.

The geologic record at Mt. Nemrut indicates numerous prehistoric explosive eruptions during the Holocene Epoch (from about 10,000 years ago through the present); the last observed eruption of lava was in 1441. The last well-documented explosive eruption occurred during 1650. Volcanism at Mt. Nemrut is the result of tectonic activity associated with the collision of the Arabian and Eurasian Plates; this collision is ongoing, and the volcano is merely quiescent at present.

Astronaut photograph ISS018-E-10206 was acquired on December 3, 2008, with a Nikon D2Xs digital camera fitted with an 800 mm lens, and it is provided by the ISS Crew Earth Observations experiment and the Image Science & Analysis Laboratory, Johnson Space Center. The image was taken by the Expedition 18 crew. The image in this article has been cropped and enhanced to improve contrast. Lens artifacts have been removed. The International Space Station Program supports the laboratory to help astronauts take pictures of Earth that will be of the greatest value to scientists and the public, and to make those images freely available on the Internet. Additional images taken by astronauts and cosmonauts can be viewed at the NASA/JSC Gateway to Astronaut Photography of Earth. Caption William L. Stefanov, NASA-JSC.