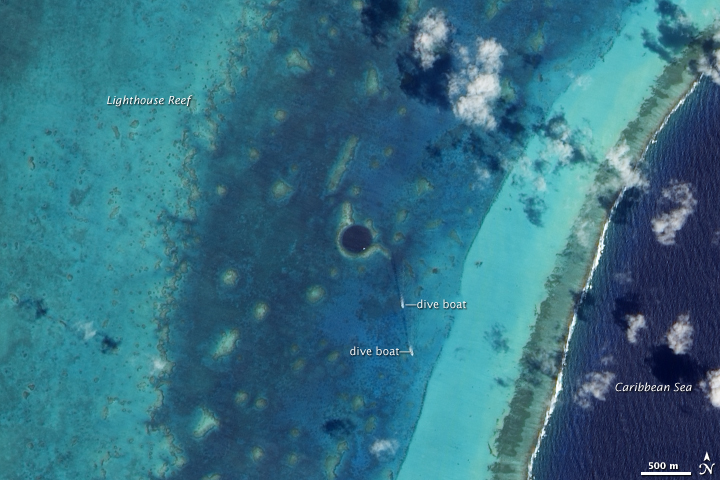 The Advanced Land Imager (ALI) on NASA’s Earth Observing-1 satellite captured this image of the Great Blue Hole and Lighthouse Reef in the Caribbean Sea on March 24, 2009. The Great Blue Hole appears at the center of the image, surrounded by a ring of lighter color caused by elevated coral. In fact, parts of the ring surrounding this feature actually crest the water surface at low tide, but a layer of shallow water covers most of Lighthouse Reef Atoll. Boats leave tiny white tracks on the nearby water surface, and two boats appear to travel away from the Hole in this image. East of the boats, a broad band of aquamarine indicates an area of especially shallow water along the reef’s margin. Along its easternmost edge, the reef crests the ocean surface, where breaking waves from the Caribbean Sea form a jagged line of white.

Boats traveling to and from the Great Blue Hole attest to its popularity as a diving site. Besides modern-day marine life, this vertical cave contains remnants from its days above water. When much of Earth’s water was sequestered in glaciers, global sea level was lower. During this time, stalactites or “dripstones” formed inside this cave, and those rocks are preserved underwater today.

Believed to be the world’s largest feature of its kind, the Great Blue Hole is part of the larger Belize Barrier Reef Reserve System, a World Heritage site of the United Nations Educational, Scientific and Cultural Organization (UNESCO).

This marine wonder off of Belize is rich with mystery and biodiversity.

Sediment off the Yucatan Peninsula

A burst of color lit the shallow waters of the Gulf of Mexico off the Yucatan Peninsula on December 14, 2008.