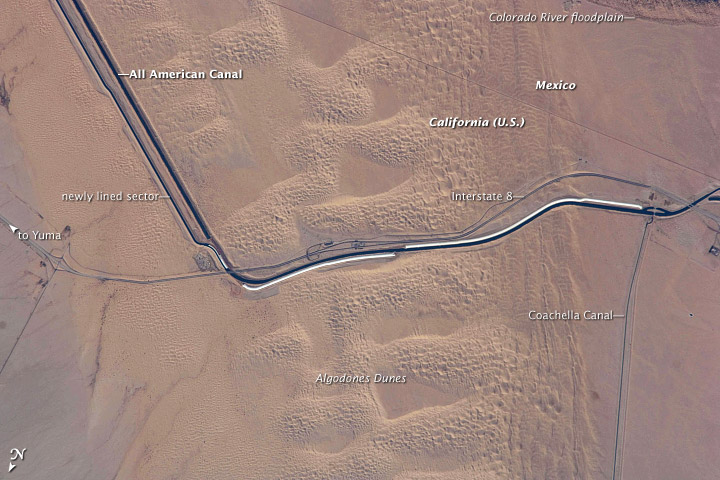 The All-American Canal, the largest irrigation canal in the world and a key landmark along the U.S.-Mexico border, shows up in this astronaut photograph. This image captures about 15 kilometers (9.3 miles) of the important infrastructure corridor just west of Yuma, Arizona. The prominent dark line crossing the image is the Canal, which is crossed in this view by Interstate Highway 8. The canal carries 428 cubic meters (15,155 cubic feet) of water per second westward from the Colorado River to support the intensive agriculture of California’s Imperial and Coachella Valleys to the northwest and nine cities, including El Centro. The canal system is the Imperial Valley’s only source of water, and it allows irrigation of more than 2,000 square kilometers (500,000 acres) of agricultural fields.

This section of the canal requires constant maintenance. Approximately 68,000 acre-feet of water per year are lost by seepage from the All American Canal, especially where the canal crosses the great Algodones Dune Field, a portion of which is visible extending from top to bottom in the center of the image. Additionally, dune sand is constantly blown southeast into the canal. As part of California’s Colorado River Water Use Plan, 37 kilometers (23 miles) of the canal is being lined to prevent water loss by seepage. A recently opened sector parallels the old canal (image left), and new lined sectors are under construction (bright lines, center). Engineers have sited new sections of the canal to avoid the worst areas of dune-sand invasion, so that the new configuration will be significantly cheaper to maintain and operate.

A new road—unseen in prior imagery—crosses the dunes and marks the U.S.-Mexico border, part of border fence construction efforts. The margin of the Colorado River floodplain in Mexico is just visible 2 kilometers (1.2 miles) south of the border (image upper right corner). This floodplain is Mexico’s equivalent of the Imperial Valley in terms of its enormous irrigated agricultural production.

Astronaut photograph ISS018-E-24949 was acquired on January 31, 2009, with a Nikon D2Xs digital camera fitted with an 800 mm lens. It is provided by the ISS Crew Earth Observations experiment and the Image Science & Analysis Laboratory, Johnson Space Center. The image was taken by the Expedition 18 crew. The image in this article has been cropped and enhanced to improve contrast. Lens artifacts have been removed. The International Space Station Program supports the laboratory to help astronauts take pictures of Earth that will be of the greatest value to scientists and the public, and to make those images freely available on the Internet. Additional images taken by astronauts and cosmonauts can be viewed at the NASA/JSC Gateway to Astronaut Photography of Earth. Caption by M. Justin Wilkinson, NASA-JSC.

The largest irrigation canal in the world and a key landmark along the U.S.-Mexico border shows up in this astronaut photograph. This image captures about 15 kilometers (9.3 miles) of the important infrastructure corridor just west of Yuma, Arizona.

Acquired December 17, 2010, this natural-color image shows a sediment-laden Lago Alajuela, a reservoir of the Panama Canal.