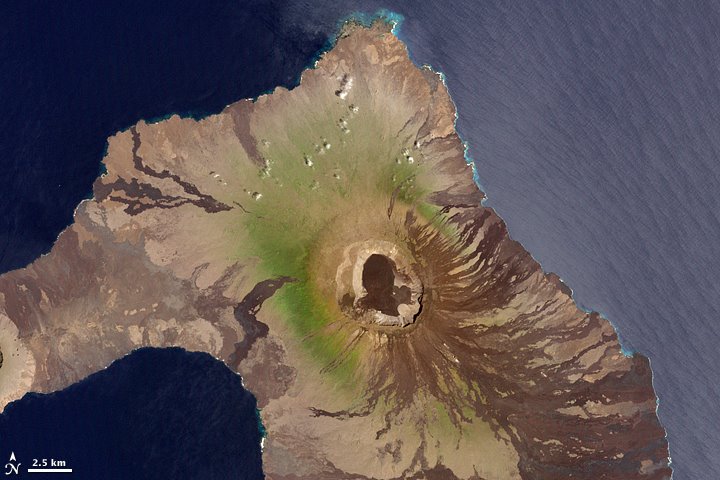 At the north end of the Galapagos’ largest island, Isabela, a volcano straddles Earth’s equator. It is the Wolf Volcano, or Volcan Wolf, and it ranks among the archipelago’s most active volcanoes. Volcan Wolf’s first historical eruption was recorded in 1797, and nine more documented eruptions followed over the next two centuries.

Although ancient by human standards, today’s Galapagos Islands, Volcan Wolf included, are geologically young and dynamic. They likely result from a mantle plume, a column of searing-hot rock that rises from the Earth’s interior and builds volcanoes at the surface. Some parts of the island chain are less than a million years old. Likewise, some older volcanoes may have surfaced for a brief geologic time span before sinking below the ocean waves. Such surfacing followed by sinking might explain a new discovery at Volcan Wolf: pink lizards.

First observed in 1986, a group of pink-tinged iguanas, named “rosada” were described in detail by an international team of researchers in January 2009. The researchers believe that this group of iguanas are a previously unknown species and that they provide evidence of ancient diversification among Galapagos land iguanas.

The rosada iguanas do present a puzzle. The research team describing the iguanas estimated their age at 5.7 million years, yet geologists estimate the age of Volcan Wolf at less than half a million years. One possible explanation for this discrepancy is that the iguanas evolved on an older volcano that eventually sank below the waves, and their descendants moved to new quarters.

The nineteenth-century naturalist Charles Darwin visited the Galapagos Islands on the Beagle expedition of the 1830s. He later developed the theory of evolution by natural selection based partly on his observations of the archipelago’s animal life—though not the pink iguanas. Darwin’s visit didn't include a stop on Wolf Volcano.

Volcan Wolf’s first historical eruption was recorded in 1797, and nine more documented eruptions followed over the next two centuries. 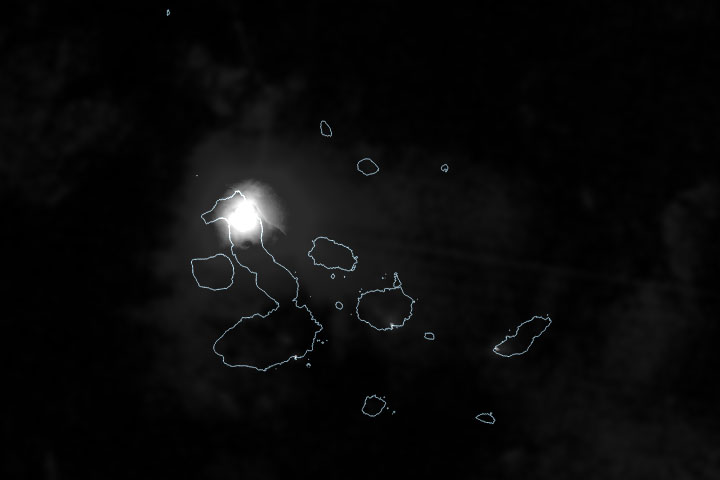 A Wolf Awakens at Night

Incandescent lava erupts from a volcano in the Galápagos Islands. 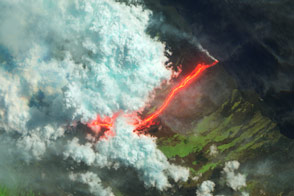 After 33 years of inactivity, Wolf volcano in the Galapagos has reawakened.

Though the explosive and most visible eruptive activity seems to have subsided, lava is still flowing above and below ground at the largest volcano in the Galapagos Islands.