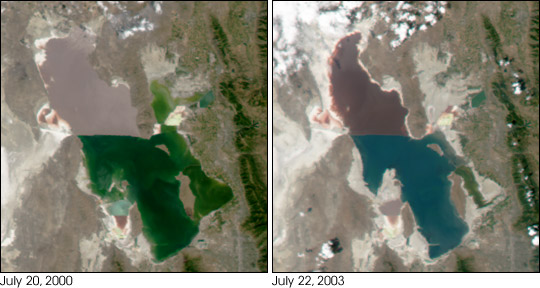 Entering its fifth consecutive year of drought, Utah was recently identified as the driest state in the United States by the U.S. Department of Agriculture. This year, Salt Lake City has received only about 75 percent of its normal rainfall—a cumulative deficit of more than 13 inches over the last five years. Some estimates suggest the damages statewide due to the drought’s ongoing impacts on croplands and livestock could total as much as $1 billion.

From its vantage point in space about 705 km above the Earth, the Terra satellite’s observations of Great Salt Lake provide a unique perspective on the dry conditions in Utah. This pair of Moderate Resolution Imaging Spectroradiometer (MODIS) images shows the Great Salt Lake on July 20, 2000 (left), and on July 22, 2003 (right). The water level has clearly receded in that 3-year span, visibly reducing the surface area of the lake.

Great Salt Lake’s average water level is 1,280 meters (4,200 feet) above sea level. Currently the lake is about 1,278 meters (4,194 feet) above sea level. The lake is relatively shallow, which is why this seemingly slight reduction in its level so noticeably affects its surface area. Notice Antelope Island, toward the southeastern corner (bottom right) of the lake. In 2000, it was an island but today it has joined the mainland. The same is true of Carrington Island, near the lake’s western shore (middle left).

The region around Great Salt Lake is typically hot and dry during the summer and generally gets precious little rainfall this time of year. Most of the lake’s water comes from snow melt that flows from the nearby Wasatch Mountain Range to the lake mainly through the Reber and Jordan Rivers. Since there are no outlet rivers flowing from the lake, water escapes through evaporation, thus leaving behind dissolved minerals and making the lake very salty (roughly 8 times saltier than seawater).

There is a train trestle running from east to west through the middle of Great Salt Lake that effectively partitions it into two halves (with two small culverts that allow only a little intermingling of the waters from north and south). The waters in the north are both shallower and much saltier than in the south. Certain kinds of algae and bacteria thrive in this portion of the lake, which gives it its pinkish color.