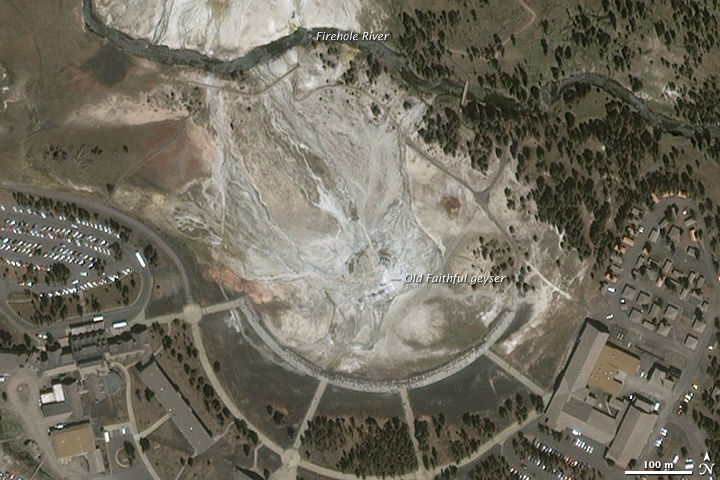 Yellowstone National Park’s Old Faithful Geyser erupts so reliably—every hour on the hour—you can set your watch by it. So goes the legend, but it’s not true. Time spans between eruptions vary from 65 to 92 minutes, and have generally increased over the years, thanks to changes in the geyser’s plumbing.

The commercial Ikonos satellite captured this photo-like image of Yellowstone’s popular tourist attraction on July 18, 2002. This high-resolution image clearly shows the network of roads, parking lots, sidewalks, buildings, and even cars around the geyser. The geyser itself is surrounded by bare ground shaped by recurring rivulets of water that have erupted from the geyser. Most of the water channels visible in this image head northwest, toward the Firehole River, named by trappers for recurring steam that suggested it was on fire. Farther away from the geyser, trees and grass fill the scene.

Under normal conditions, water heated to its boiling point vaporizes, but water in hot springs buried deep underground has no opportunity to vaporize. As a result, the water can actually exceed the temperature of its boiling point while remaining a liquid. Geysers result when such hot springs occur with small outlets near the surface. When the superheated water does rise, it begins vaporizing even before it reaches the surface. The bubbles’ steam pushes the geyser’s water above the ground in explosive eruptions.

Yellowstone National Park’s Old Faithful Geyser erupts so reliably—every hour on the hour—you can set your watch by it. So goes the legend, but it’s not true.

It takes thousands of years for rainwater to seep deep underground, warm up, and return to the surface before bathers can enjoy it in Arkansas.

An arid region grew even drier between 2003 and 2009 due to human consumption of water for drinking and agriculture.