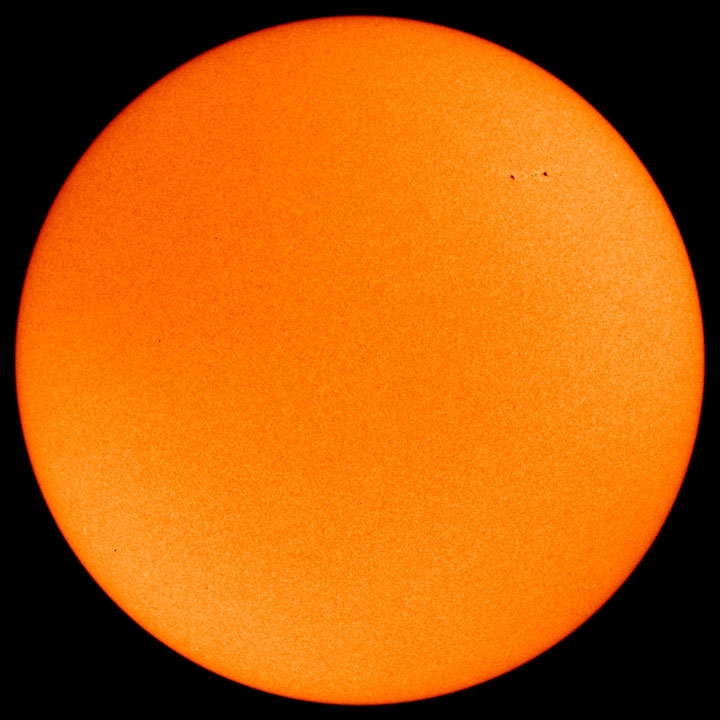 Activity on our Sun varies over a roughly 11-year cycle. At the beginning of a cycle, sunspots are sparse. The spots gradually increase over several years, peak, and subsequently decrease over the next several years, with spots from old and new cycles often occurring simultaneously as a new cycle starts. From 1755 to 2007, astronomers counted a total of 23 cycles of sunspot activity. In January 2008, satellite imagery showed the beginnings of Solar Cycle 24. Sunspot activity remained minimal in the months that followed, but at the end of October 2008, another batch of sunspots appeared, most of them belonging to the new cycle.

The Michelson Doppler Imager acquired this image of the Sun on November 3, 2008. Two dark sunspots appear in the upper right, along with faculae—bright areas that form around sunspots. While sunspots are actually cooler regions on the Sun’s surface, faculae are hot spots that coincide with sunspots. Both phenomena are produced by turbulence in the Sun’s magnetic field.

Starting on October 31, 2008, five sunspots appeared in quick succession, and progressed across the Sun’s surface over the next four days. One of five belonged to Solar Cycle 23. The other four, however, showed characteristics of the emerging Solar Cycle 24. Sunspot forecasters can distinguish old and new cycles by looking at two features of sunspots. The first feature is latitude. The first sunspots of a new cycle initially appear at high latitudes. As the cycle progresses, they begin appearing progressively closer to the solar equator. The second feature is polarity. Like the Earth, the Sun has a magnetic field, but the Sun’s field flips much more frequently than the Earth’s—usually at the peak of each sunspot cycle. The rapid flipping of the Sun’s magnetic pole affects the polarity of sunspots, helping scientists distinguish between sunspots belonging to different solar cycles.

After the appearance of the first sunspot associated with Solar Cycle 24 in January 2008, sunspot activity remained low, as it had for the previous year. The flurry of sunspots starting in late October 2008 suggested the beginning of heightened activity, although sunspot forecasters pointed out that the peak of Solar Cycle 24 was still years away.

This pair of images from the Solar and Heliospheric Observatory (SOHO) spacecraft shows sunspots and ultraviolet light emitted by the Sun on April 29, 2009.