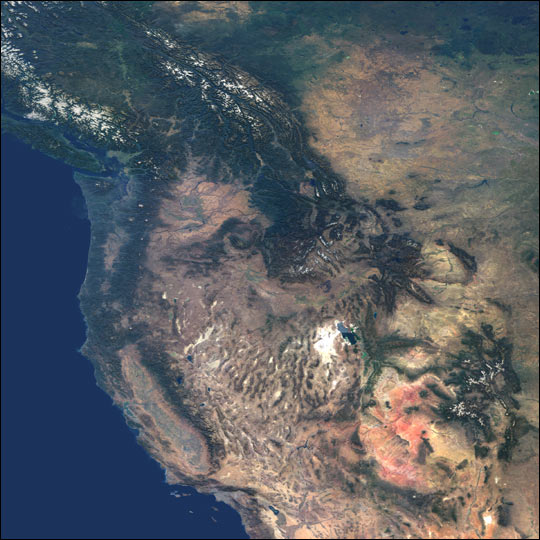 This natural-color image from the Multi-angle Imaging SpectroRadiometer (MISR) captures the beauty of the western United States and Canada. Data from 45 swaths from MISR’s vertical-viewing (nadir) camera were combined to create this cloud-free mosaic. The image extends from 48° N 128° W in the northwest, to 32°N, 104° W in the southeast, and has been draped over a shaded relief Digital Terrain Elevation Model from the United States Geological Survey.

The image area includes much of British Columbia, Alberta and Saskatchewan in the north, and extends southward to California, Arizona and New Mexico. The snow-capped Rocky Mountains are a prominent feature extending through British Columbia, Montana, Wyoming, Colorado and New Mexico. Many major rivers originate in the Columbia Plateau region of Washington, Oregon and Idaho. The Colorado Plateau region is characterized by the vibrant red-colored rocks of the Painted Desert in Utah and Arizona, and in New Mexico, White Sands National Park is the large white feature in the Southeast corner of the image with the Malpais lava flow just to its North. The southwest is dominated by the Mojave Desert of California and Nevada, California’s San Joaquin Valley, the Los Angeles basin and the Pacific Ocean.

The Multi-angle Imaging SpectroRadiometer observes the daylit Earth continuously from pole to pole, and every 9 days views the entire globe between 82 degrees north and 82 degrees south latitude. The MISR Browse Image Viewer provides access to low-resolution true-color versions of these images. This data product was generated from a portion of the imagery acquired during 2000-2002.

Image courtesy NASA/GSFC/LaRC/JPL, MISR Team. Jim Knighton of Clear Light Image Products produced the image mosaic. Please note that the high-resolution TIF image is provided here at a pixel resolution of approximately 1.1 kilometers, but is available from the producer at a resolution of 278 meters. Text by Clare Averill (Acro Service Corporation/JPL).

Scandinavia and the Baltic Region