Smoke over Nigeria and the Gulf of Guinea 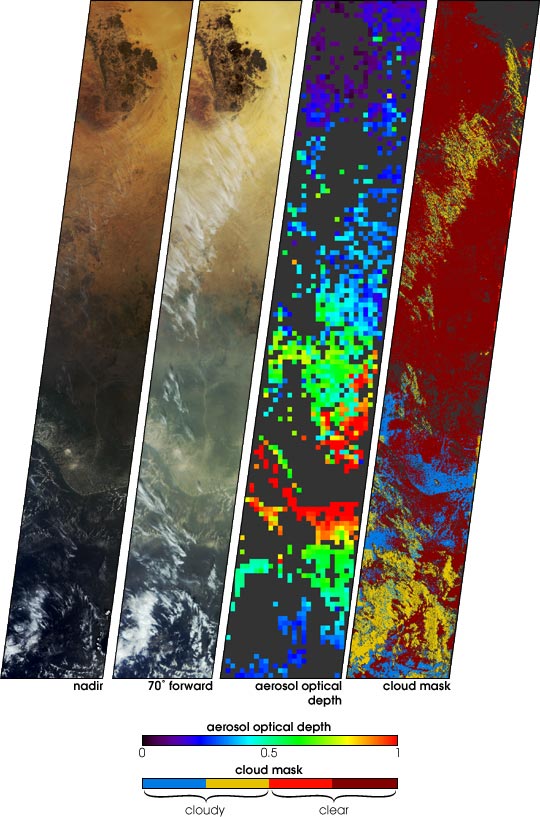 These images and data products from the Multi-angle Imaging SpectroRadiometer (MISR) document extensive smoke from fires burning throughout Nigeria and north central Africa on January 31, 2003. At left are natural-color views acquired by MISR's vertical-viewing (nadir) and most oblique forward viewing cameras. The images extend from arid Niger in the north (including the dark-colored A‹r Mountains), through forested Nigeria, and beyond the Niger Delta to the Gulf of Guinea and the open ocean. Smoke present in the lower portion of the images, and a series of thin, high clouds, are more apparent at the oblique view angle. Although numerous small smoke plumes emanate from fires buring within the image area, some of the smoke can also be attributed to fires that were burning across the north central African Sahel and savanna regions at this time and during the previous two weeks.

A map of aerosol optical depth, which is a measure of atmospheric particle abundance, is shown at center-right. MISR utilizes the changes in the atmosphere's ability to transmit light and the variation in scene brightness at different view angles to retrieve aerosol optical depth and deduce some of the properties of the particles. A thick pall of smoke is present over Nigeria and the Gulf of Guinea, indicated by green, yellow and red pixels over these regions. Clear skies are indicated by the blue and purple pixels over the desert regions and ocean. Places where clouds or other factors precluded an aerosol retrieval are shown in dark gray.

The position of clouds appears to move with view angle relative to the ground due to geometric parallax. MISR utilizes the parallax effect to generate its stereo height fields. The right-hand panel is a stereoscopically derived cloud mask (SDCM), which classifies regions as clear or cloudy based upon their heights above the surface and is one of several cloud masks produced by MISR. The high and low confidence designations are related to how well the stereo height retrieval algorithms were able to determine the absolute height of the clouds. The pall of smoke, unlike the clouds and underlying surface, does not contain an organized spatial texture, and the stereo retrievals classify the smoke-filled regions as clear despite the large abundance of airborne particles.

The Multi-angle Imaging SpectroRadiometer observes the daylit Earth continuously and every 9 days views the entire globe between 82 degrees north and 82 degrees south latitude. The MISR Browse Image Viewer provides access to low-resolution true-color versions of these images. These data products were generated from a portion of the imagery acquired during Terra orbit 16602. The panels cover an area of about 380 kilometers x 2520 kilometers.

Smoke Signals from the Alaska and Yukon Fires

Fire and Deforestation near the Xingu River