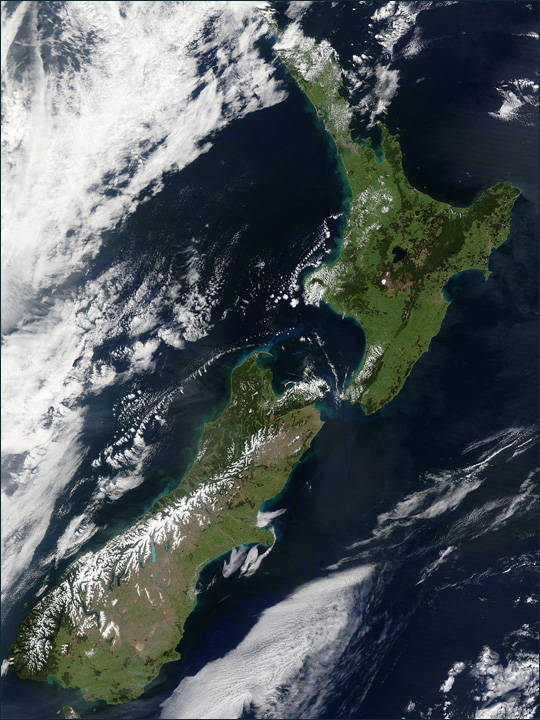 This stunning true-color image provides a rare, cloud-free look at the island nation of New Zealand, including most of its North and South Islands. This scene was acquired by the Moderate Resolution Imaging Spectroradiometer (MODIS), flying aboard NASA’s Terra satellite, on October 23, 2002. New Zealand is situated in the South Pacific Ocean, roughly 2,000 km (1,250 miles) southeast of Australia. Wellington, the capital of New Zealand, is located on the southern tip of the North Island, looking across Cook Strait toward South Island.

The New Zealand land mass is ancient. Geologists estimate that it separated from the ancient supercontinent of Gondwana around 80 million years ago as a single land mass, which geologists call Rangitata. Around 5 million years ago, NewZealand’s North and South Islands began to take the shape they have today. Rainforest covered most of New Zealand’s land area as recently as seven thousand years ago. Isolated from the rest of the world by vast expanses of ocean, New Zealand was a haven for unique species of flora and fauna, including many species of flightless birds that evolved in safety at ground level through the millennia. Perhaps the most well-known of these flightless birds today is the Kiwi, which adapted to a forest environment, feeding mainly upon earthworms and larvae.

Humans first settled on New Zealand somewhere between 950 and 1130 AD. The first settlers were Polynesians who, well known for their navigation skill, probably made the voyage in twin-hulled or outrigger canoes. These first Polynesian settlers called their new home “Aotearoa,” which means “land of the long white cloud.”

The first Europeans believed to have visited New Zealand were led by Abel Janszoon Tasman from the Netherlands. In 1633, Tasman was hired by the Dutch East India Company to sail the trading routes between Europe and Batavia (what is today known as Jakarta, Indonesia). In 1642, on a 10-year contract with the Company, Tasman was instructed to find the elusive and wealthy Southern Continent that supposedly stretched across the Pacific. Tasman set sail on Aug. 13, 1642, in command of two ships — the Zeehaen and the Heemskerck. Four months later, Tasman and his crew spotted the coast of a new land that Tasman described as “a large land, uplifted high.” He named it “Staten Landt,” in reference to the Land of the Dutch States-General.

Although there are no clear records of precisely how New Zealand got its modern name, its first usage is attributed to Dutch Captain Willem Jansz. In 1620, Jansz sailed his ship, the Duyfken, southeastward in search of gold and riches. During his voyage, Jansz observed an island off the coast of New Guinea, which he named “Nieu Zelandt.” Subsequently, many maps recorded the name “Nieu Zelandt” as recently as the late 1700s. Other maps appearing as early as 1645 carried the name “Zeelandia Nova” (meaning “new sea land”).

Some historians suggest the land was named after the one of the Dutch provinces — Zeelandt, which was separated from the province of Holland by the sea (thus “Sea-land”). Australia was given the name Hollandia Nova (New Holland) and so Zeelandia Nova (New Zeeland), separated by an expanse of ocean, makes sense. Other historians suggest that Zeeland was the name of the second most important chamber of the Dutch East India Company. Thus, they suggest the island was named after this chamber.

Forests are being harvested near Tokoroa, New Zealand, which has been described as the hub of New Zealand’s forestry industry. The large tan areas are cleared forests. The land use pattern that looks like tan beads on a string are clearings used to stock timber before it is sent to pulp and paper mills about 4 kilometers south of Tokoroa. The light green areas around the town are dairy farms.

New Zealand’s capital, Wellington, sits at the southwestern tip of North Island near the Cook Strait. The city in the second largest in New Zealand (after Auckland), and at 41 south latitude, it is the southernmost capital city in the world. The North and South Islands of New Zealand are located along the active Australian-Pacific tectonic plate boundary. The glancing collision of these two tectonic plates results in uplift of the land surface, expressed as low hills on North Island and the Southern Alps on South Island.