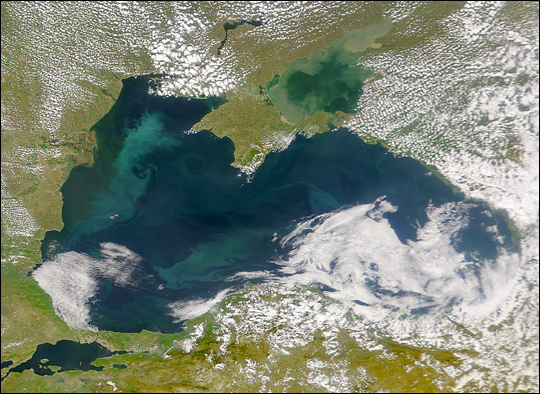 This true-color image shows bright, turquoise-colored swirls across the surface of the Black Sea, signifying the presence of a large phytoplankton bloom. Scientists have observed similar blooms recurring annually, roughly this same time of year. The Sea of Azov, which is the smaller body of water located just north of the Black Sea in this image, also shows a high level of biological activity currently ongoing. The brownish pixels in the Azov are probably sediments carried in from high waters upstream. This scene was acquired by the Sea-viewing Wide Field-of-view Sensor (SeaWiFS), flying aboard the OrbView-2 satellite, on May 4, 2002.

According to the Black Sea Environment Programme’s Marine Hydrophysical Institute, the Black Sea is “one of the marine areas of the world most damaged by human activities.” The coastal zone around these Eastern European inland water bodies is densely populated—supporting a permanent population of roughly 16 million people and another 4 million tourists each year. Six countries border with the Black Sea, including Ukraine to the north, Russia and Georgia to the east, Turkey to the south, and Bulgaria and Romania to the west.

Because it is isolated from the world’s oceans, and because there is an extensive drainage network of rivers that empty into it, the Black Sea has a unique and delicate water balance which is very important for supporting its marine ecosystem. Of particular concern to scientists is the salinity, water level, and nutrient levels of the Black Sea’s waters, all of which are, unfortunately, being impacted by human activities. Within the last three decades the combination of increased nutrient loads from human sources together with pollution and over-harvesting of fisheries has resulted in a sharp decline in water quality.

Scientists from each of the Black Sea’s bordering nations are currently working together to study the issues and formulate a joint, international strategy for saving this unique marine ecosystem. Working with a spirit of placing more emphasis on joint ownership of the Black Sea’s resources, and less emphasis on blame, it is hoped that the cooperating countries can strike an effective balance between both enjoying and preserving the Black Sea.

Bloom in the Black Sea

Phytoplankton and stirred up sediments deliver a splash of spring color to the Black Sea.

Phytoplankton color the water with a burst of spring growth.

Phytoplankton color the water with a burst of spring growth.