Winter and Summer Views of the Salt Lake Region 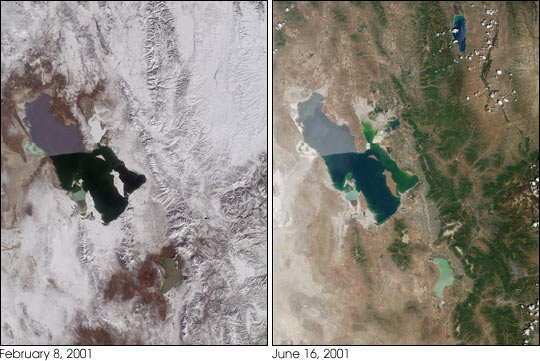 Magnificent views of the region surrounding Salt Lake City, Utah are captured in these winter and summer images from the Multi-angle Imaging SpectroRadiometer’s vertical-viewing (nadir) camera. Salt Lake City, situated near the southeastern shore of the Great Salt Lake, is host to the 2002 Winter Olympic Games, which open Friday, February 8. Venues for five of the scheduled events are at city (indoor) locations, and five in mountain (outdoor) facilities. All ten can be found within the area contained in these images. Some of the outdoor events take place at Ogden, situated north of Salt Lake City and at Park City, located to the east.

Salt Lake City is surrounded by mountains including the Wasatch Range to the east, and the temperature difference between the Great Salt Lake and the overlying atmosphere enhances the moisture content of winter storms. These factors, in combination with natural cloud seeding by salt crystals from the lake, are believed to result in greater snowfall in neighboring areas compared to more distant locales.

In addition to the obvious difference in snow cover between the winter and summer views, water color changes in parts of the Great Salt Lake are apparent in these images. The distinctly different coloration between the northern and southern arms of the Great Salt Lake is the result of a rock-filled causeway built in 1953 to support a permanent railroad. The causeway has resulted in decreased circulation between the two arms and higher salinity on the northern side. The southern part of the lake includes the large Antelope Island, and at full resolution a bridge connecting it to the mainland can be discerned.

These images are natural color views acquired on February 8, 2001 and June 16, 2001, respectively. Each image represents an area of about 220 kilometers x 285 kilometers.

The lake and surrounding landscape are characterized by many flavors and mixtures of salt.