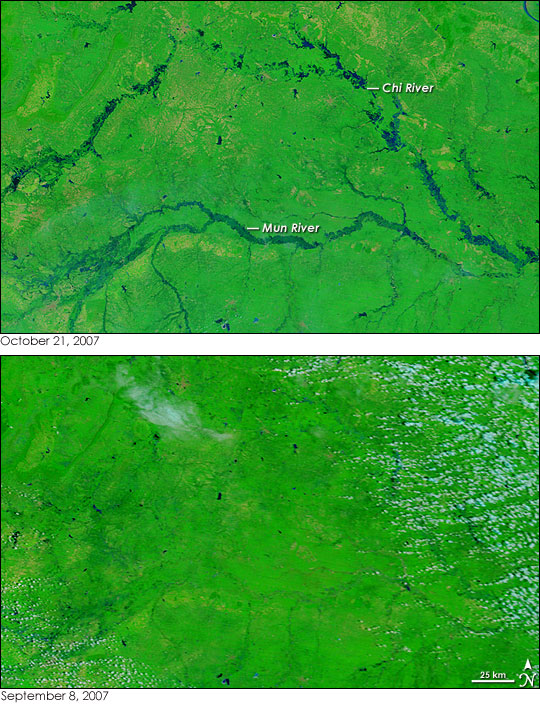 The annual monsoon was just coming to a close when the Moderate Resolution Imaging Spectroradiometer (MODIS) flying on NASA’s Terra satellite captured this view of swollen rivers in northeastern Thailand on October 21, 2007. The monsoon typically runs from about May through November, followed by a cooler, dry season. By October, the rivers of northern Thailand are often swollen with monsoon rains, and 2007 was no exception. The floods of 2007 were not as severe as the extreme flooding seen in 2006 in most regions, said the Dartmouth Flood Observatory, but they were damaging nonetheless. This image shows flooding along the Mun and Chi Rivers. Flash floods in the mountains around the Chi River caused enough damage that the region was declared a flood disaster zone, said the Dartmouth Flood Observatory.

The image and the accompanying image from September 8 were made with a mixture of infrared and visible light to increase the contrast between water and earth. In these images, water is dark blue or black. Plant-covered land is green, and bare earth is tan. Clouds are pale blue and white. A comparison between the two images reveals that the parabola-shaped Chi River was swollen along most of its length on October 21. A web of blue and green surrounds the main channel of the Mun River in the top image, and the river’s tributaries were also running high. The large image, which includes a broader area, also shows flooding on the Pa Sak, Nan, Yom, and Chao Phraya Rivers to the west of the Mun and Chi Rivers.

Daily images of Southeast Asia are available from the MODIS Rapid Response System.

Flooding in Thailand and Cambodia

Acquired October 11, 2011, and October 8, 2010, these false-color images compare conditions in Thailand and Cambodia, where severe flooding struck in 2011.