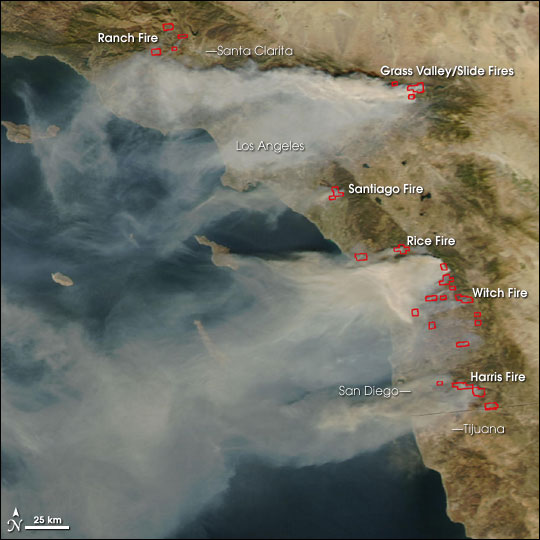 This image of the fires (locations marked in red) burning in Southern California was captured at 2:40 p.m. Pacific Daylight Time on October 23, 2007. Strong Santa Ana winds were still pushing smoke westward over the Pacific. Fires are strung along the mountains from locations near Santa Clarita to Tijuana. According to news reports from the morning of October 24, nearly a million people had evacuated their homes as fires spread from the mountains and hills toward cities and towns near the coast.

This image was captured by the Moderate Resolution Imaging Spectroradiometer (MODIS) on NASA’s Aqua satellite. The large image provided above is the sensor’s maximum spatial resolution (level of detail), which is 250 meters per pixel. The MODIS Rapid Response Team provides twice-daily images of a wider area in additional resolutions and formats, including an infrared-enhanced “false-color” version that highlights burn scars.

You can download a 250-meter-resolution KMZ file of smoke from the fires suitable for use with Google Earth.

Driven by Santa Ana winds, several large wildfires flared across Southern California over the weekend of October 20, 2007. Before winds died down late in the week, the fires burned hundreds of thousands of acres and forced at least half a million people from their homes. Smoke caused unhealthy air quality in many areas.