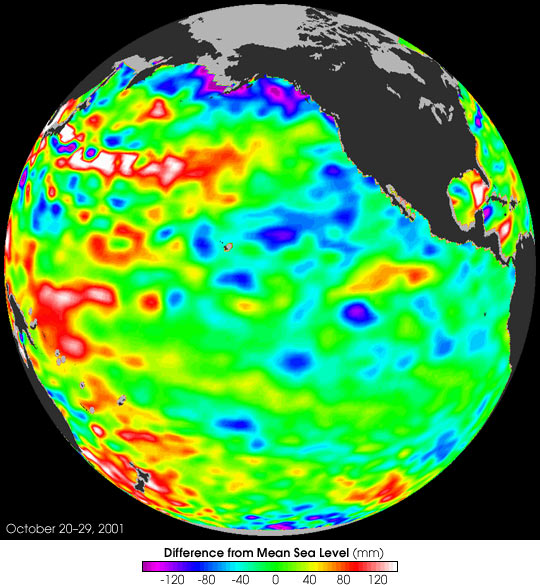 Like fall and winter of 2000, this year’s TOPEX/Poseidon satellite data shows that the Pacific Ocean continues to be dominated by the strong Pacific Decadal Oscillation, which is larger than the El Niño/La Niña pattern. The data, taken during a ten-day collection cycle ending Oct. 29, 2001, show that the near-equatorial ocean has been very quiet in the past year, and sea levels and sea surface temperatures are near normal. Above-normal sea surface heights and warmer ocean temperatures, indicated by the red and white areas, still blanket the far western tropical Pacific and much of the north mid-Pacific. Red areas are about 10 centimeters (4 inches) above normal; white areas show the sea surface height is between 14 and 32 centimeters (6 to 13 inches) above normal.

In the western Pacific, the buildup of the Pacific Decadal Oscillation pattern, first noted by TOPEX/Poseidon oceanographers more than three years ago, has outlasted both the El Niño and La Niña of the past few years. This warmth contrasts with the Bering Sea, Gulf of Alaska and the west coast of the United States, where lower than normal sea surface levels and cool ocean temperatures continue, as indicated by the blue areas. The blue areas are between 5 and 13 centimeters (2 and 5 inches) below normal, while the purple areas range from 14 to 18 centimeters (6 to 7 inches) below normal.

According to oceanographer Dr. William Patzert of NASA’s Jet Propulsion Laboratory, Pasadena, Calif., the striking similarity between data taken in 2000 and the same time period in 2001 indicates that winter weather forecasts for this year will be similar to last year.