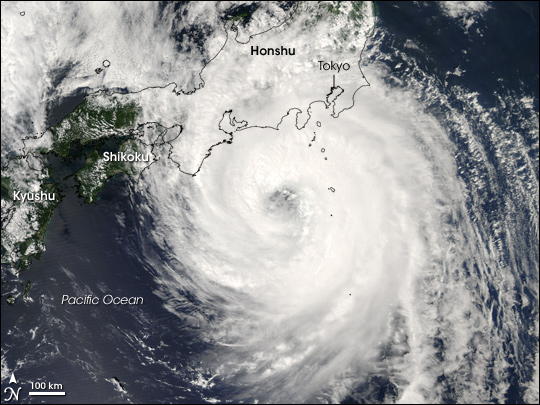 The Moderate Resolution Imaging Spectroradiometer (MODIS) on NASA’s Aqua satellite acquired this photo-like image of Typhoon Fitow approaching Japan at 1:15 p.m. local time (4:15 UTC) on September 6, 2007. Roughly an hour later, the Joint Typhoon Warning Center estimated Fitow’s sustained winds to be over 160 kilometers per hour (100 miles per hour), putting the storm at Category 2 strength. The satellite image shows Fitow to have tightly wound bands of clouds around a well-defined, though cloud-filled eye, and towering thunderstorms, all of which are characteristic of powerful tropical storm systems. At the time MODIS observed Typhoon Fitow, the storm’s outer edges were bringing winds and rain to Tokyo and strong storm surge to coastal areas on the islands of Honshu, Kyushu, and Skikoku.

Typhoon Fitow became a named storm on August 29, 2007. The storm system gradually built in power as it drew towards the main islands of Japan, briefly reaching Category 2 strength, then weakening to Category 1 before rebuilding again. It was forecast to reach Honshu, the largest island in Japan, on September 6, then track over the island and lose power. “Fitow” is a Micronesian word for a flower found on the island of Yap. The list of names of western Pacific storms, provided by the Hong Kong Observatory, draws on Asian languages.

You can download a 250-meter-resolution KMZ file of Typhoon Fitow suitable for use with Google Earth.