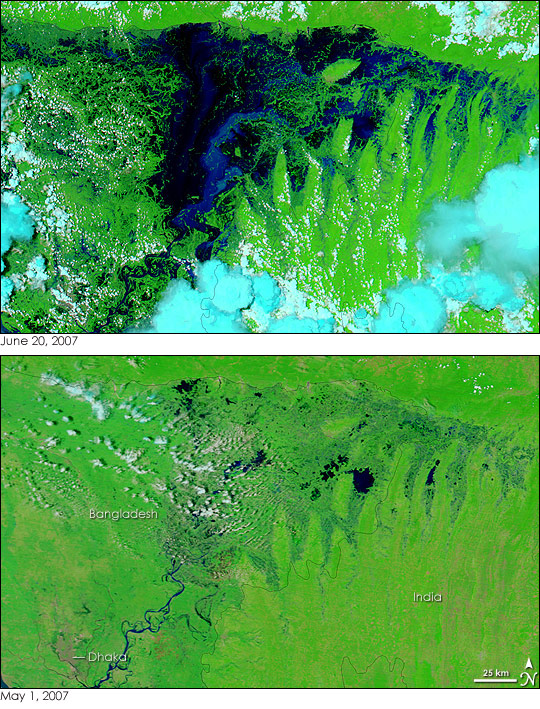 By June 20, 2007, the summer’s first floods had engulfed northeastern Bangladesh. Monsoon rains routinely flood the low-lying country in the summer, though some years are worse than others. This image, captured by the Moderate Resolution Imaging Spectroradiometer (MODIS) on NASA’s Aqua satellite, is centered on the northeast administrative region, Sylhet. Water, dark blue and black in the false-color image, covers most of the region. The floods destroyed several villages, trapped thousands of families, and forced thousands of evacuations, reported the Gulf Times on June 20. Officials were expecting the floods to worsen as monsoon rains continue to fall.

The lower image, captured by Terra MODIS, shows Bangladesh on May 1, before the monsoon started. Even during the dry season, the region is spotted with dark pools of water, an indication that the land may be marshy year-round. Both images were made with a combination of infrared and visible light to increase the contrast between water and earth. Plant-covered land is bright green, bare earth is tan, and clouds are light blue and white. The Bangladeshi capital, Dhaka, is a concentrated area of gray in the lower left corner of the image.

Daily images of Bangladesh are available from the MODIS Rapid Response System in both false color, as shown here, and photo-like true color. 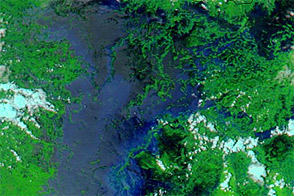 Acquired in late May and early July 2011, these false-color images show changes caused by monsoon rains in northeastern Bangladesh.