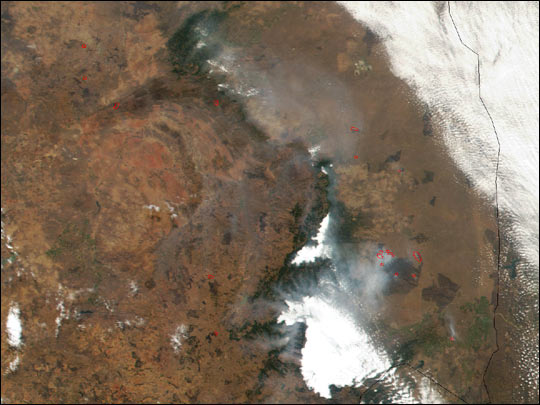 An explosive fire in Kruger National Park in the northern Republic of South Africa has killed at least 21 people and injured several others, perhaps fatally. This true-color image from NASA’s Moderate-resolution Imaging Spectroradiometer (MODIS) shows the location of that fire and several others in the region indicated in red.

Kruger National Park runs along the border of The Republic of South Africa, which takes up most of the western half of the image, and Mozambique, which takes up most of the eastern half. The deadly fire started on Tuesday, September 4, and burned just to the right of the center of this image, near the town of Skukuza. The fire spread rapidly in the winds that blow across South Africa at the end of the region’s dry season.

This image, made from MODIS data acquired on September 5, shows the perimeter of the fire burning and emitting heavy smoke. An irregularly shaped burn scar stands out in dark brown against the landscape, indicating the extent of the fire. What appears to be another large burn scar can be seen just to the southeast.

Better management should prevent fire from raging out of control in one of Namibia’s most prized wildlife preserves.

Better management should prevent fire from raging out of control in one of Namibia’s most prized wildlife preserves.

Smoke streams east from a fire in Carlsbad Caverns National Park in this true-color image from June 14, 2011.