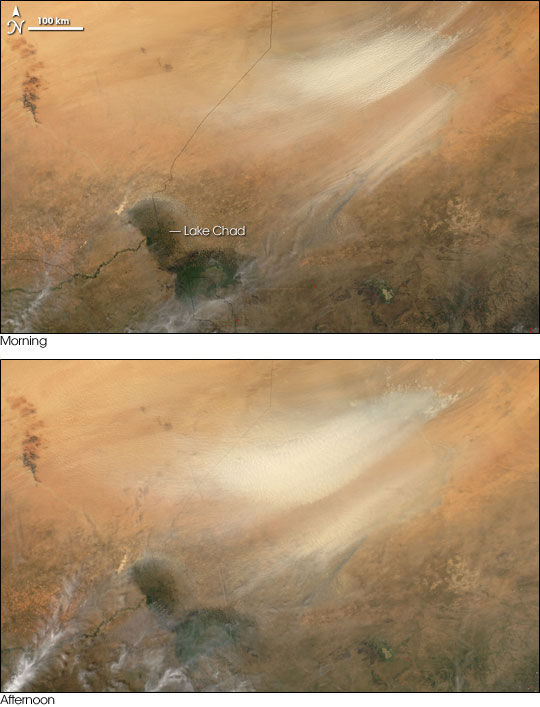 On October 16, 2005, NASA caught a dust storm in the act—twice. A large dust storm over Chad became visible in the morning, and continued kicking up particles in the afternoon. The Moderate Resolution Imaging Spectroradiometer (MODIS) flying onboard the Terra satellite captured the top image on the morning of October 16. MODIS on the Aqua satellite captured the bottom image later that day.

In these images, the dust storm appears in pale beige, partially obscuring the darker land surface. In both images, the dust storm consists of two major swaths with a more diffuse area between them. Although satellites regularly reveal dust storms, they don't always show with certainty which way the dust is blowing. Because these images show a progression of the same storm, the wind directions are easier to surmise. In the afternoon image, the dust cloud is more diffuse in the southwest, indicating that the dust is likely blowing from the northeast to the southwest. These images also give an indication of the frequency of dust storms. A close look at the imagery shows faint lines like those that a rake leaves in soil; over time, recurring dust storms have scoured the landscape. 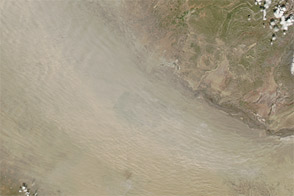 Acquired February 28, 2013, this image shows an arc of dust over Afghanistan, Turkmenistan, and Uzbekistan.

In April 2001, researchers watched with surprise as dust from an Asian storm crossed the Pacific and reached the eastern United States.