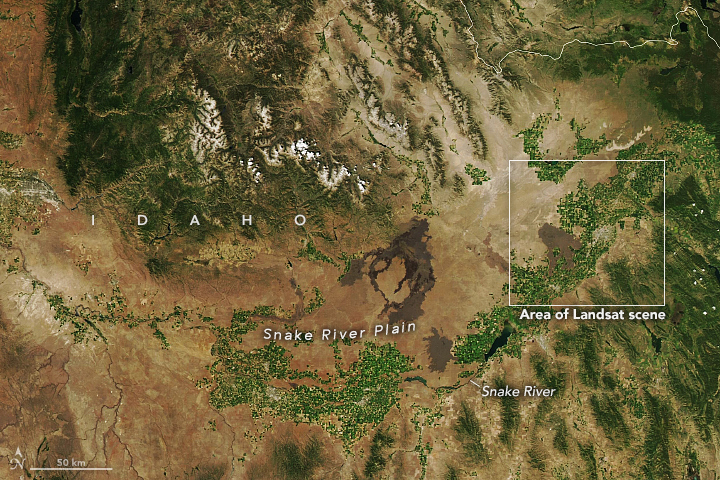 Idaho is the top potato producing state in the United States. Almost one-third of the nation’s potatoes are grown in the Snake River Plain, a belt of low-lying land that extends across southern Idaho.

The eastern part of the Snake River Plain likely formed when the North American tectonic plate drifted over a hot spot in Earth’s crust. Basaltic magma was injected into the crust, making it thicker and denser than surrounding areas. When the crust cooled and settled, the land sank. The same hotspot that created the plain now fuels the geysers in Yellowstone National Park, located just northeast of the plain. The western part of the plain is a graben—a piece of land that has sunk between parallel faults in the Earth’s crust.

Evidence of this volcanic activity can be seen in these natural-color images, which show fingers of basaltic lava reaching into farm fields. The 5,000-year-old lava field, called Hell’s Half Acre, resembles a flat moonscape with sparse vegetation.

The top image, acquired on July 11, 2022, with the Moderate Resolution Imaging Spectroradiometer (MODIS) on NASA’s Aqua satellite, shows a wide view of the area and the belt of agricultural land in the Snake River Plain. The second image, acquired on July 11, 2022, with the Operational Land Imager (OLI) on Landsat 8, shows a detailed view of the lava and farm fields around Idaho Falls.

The injection of volcanic materials makes soils in the plain especially fertile for crop production, but the area receives only about 20 to 30 centimeters (8 to 12 inches) of precipitation a year. Potatoes are especially sensitive to drought and center-pivot irrigation is supporting many of the potato fields, as indicated by the green crop circles standing out from barren ground.

The Idaho Department of Water Resources (IDWR) tracks the state’s water to ensure there is sufficient supply for competing demands. Since the first Landsat satellite was launched in 1972, IDWR has used satellite data to monitor and manage water. According to IDWR, Idaho’s 3.4 million acres of irrigated agriculture accounts for over 98 percent of the water used in the state. In 2000, IDWR and the University of Idaho received a grant from NASA to model evapotranspiration, which has allowed IDWR to efficiently monitor and manage water resources for more sustainable potato production.

Almost one-third of American potatoes are grown in the Snake River Plain, a belt of low-lying land in the southern part of the state. 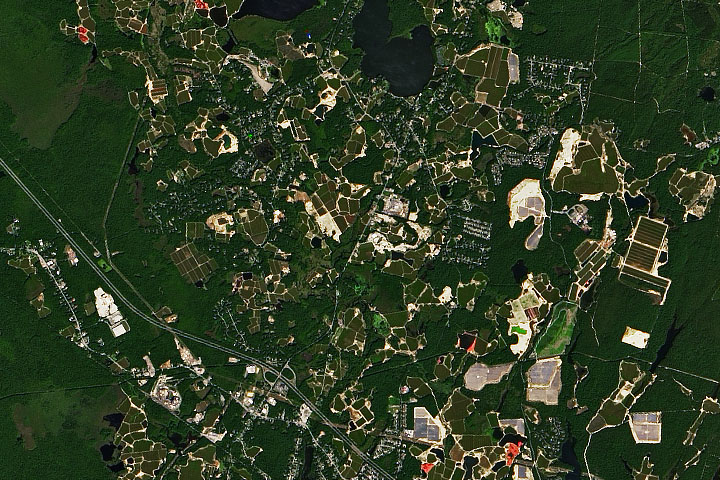 Though its name might suggest something formed by the meandering of an ancient river, the Snake River Plain of southern Idaho had a far more violent birth. Scars from its relatively recent geologic origin are printed on its surface.

Farms in the historic Oltenia province display a compelling array of shapes and sizes.

The image shows Goosenecks State Park, where the river is surrounded by canyon walls more than 1,000 feet high.