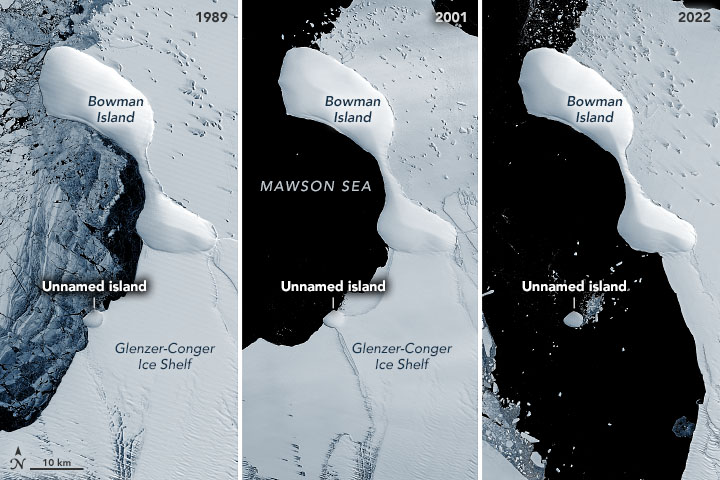 The eastern coast of Antarctica has lost most of the Glenzer and Conger ice shelves. In the process, it gained what is likely an island. If confirmed, the unnamed island would be one in a series of islands exposed in recent years as portions of the floating glacial ice hugging the continent’s coast have disintegrated.

The candidate island is visible in this triptych of images acquired by Landsat satellites between 1989 and 2022. The images are a combination of shortwave infrared and visible light, and were adjusted for consistency in brightness and color. Notice how the island has maintained the same shape, even after shelf ice detached from it, and as sea ice around it waxed and waned. That round white mound has not budged, even after large icebergs likely smashed into it following the rapid collapse of the Glenzer and Conger ice shelves this year.

The feature also appears taller than its surroundings. The elevation profile below indicates that at least part of the mass stands 30 to 35 meters (100 to 115 feet) above the surface of the sea. The data were acquired on December 22, 2021, with the Advanced Topographic Laser Altimeter System (ATLAS) on NASA’s Ice, Cloud, and land Elevation Satellite 2 (ICESat-2). 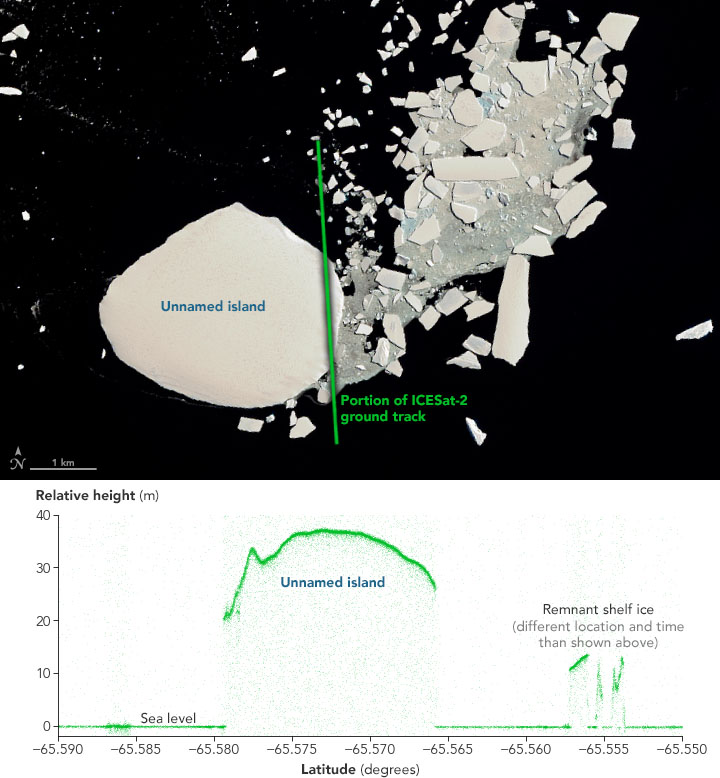 But just because a feature acts like an island and looks like an island, does not mean it is an island—at least not in the traditional sense. Scientists are still unsure if there is any solid earth breaching the sea surface below all of the snow and ice.

John Gibson, a scientist with the Australian Antarctic Division, thinks the feature is likely an ice island: a large, heavy cap of ice sitting solidly on an underwater peak. “It is undoubtedly similar to other ice islands, such as Bowman Island,” Gibson said.

Gibson called the ice island “self-perpetuating,” meaning that snow and ice accumulating on the island’s surface balances out the amount of melting that occurs underwater. If that balance becomes disrupted by a decrease in snowfall, then the ice island could thin and float away. “The unnamed island is a more-or-less permanent feature of the landscape,” Gibson said, “but may someday detach from the underlying rock and become an iceberg.”

Without anyone having been there to observe the island, questions remain about its structure. “To be absolutely sure, you would need to put a ship next to it to check for a bedrock outcrop, and maybe a radar over it to assess the ice thickness,” said Christopher Shuman, a University of Maryland, Baltimore County, glaciologist based at NASA’s Goddard Space Flight Center. “The ICESat-2 profile shows that the surface is well above sea level. That would be a whole lot of ‘ice cream’ above the ‘cone’ if there wasn’t bedrock at or above sea level.”

Traditional or ice, the island is the latest in a bunch of similar features that are no longer embedded in Antarctica’s floating glacial ice. In 2019, the U.S. Board on Geographic Names recognized Icebreaker Island, which in 1996 became isolated from the Larsen B Ice Shelf along the Antarctic Peninsula. And in 2020, researchers on a ship-based expedition discovered a small, rocky island capped with ice that may have been part of Pine Island Glacier’s ice shelf.

“The discovery of more of them is likely to continue in the years ahead due to shrinking glacial and sea ice,” Shuman said. “Obviously these are ‘new to us’ features, but we also have more people and more tools to look at the margins of Antarctica now. Several examples do not make a trend, but they do imply that other once-hidden features are likely to be noticed in the years to come.”

An unnamed mound of white off East Antarctica seems to be an island. 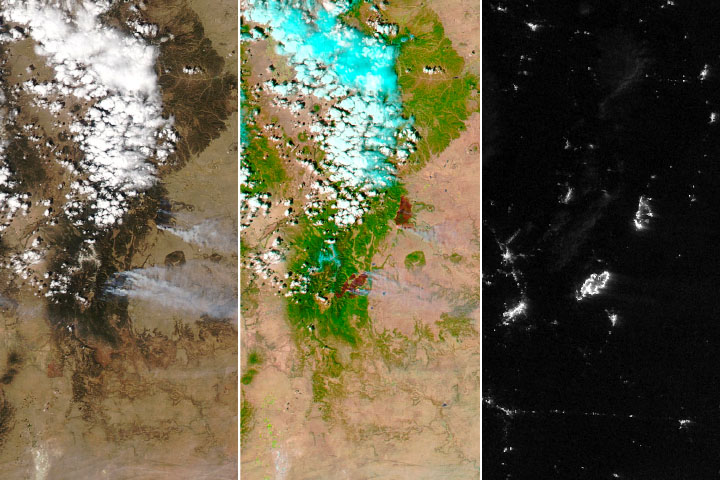 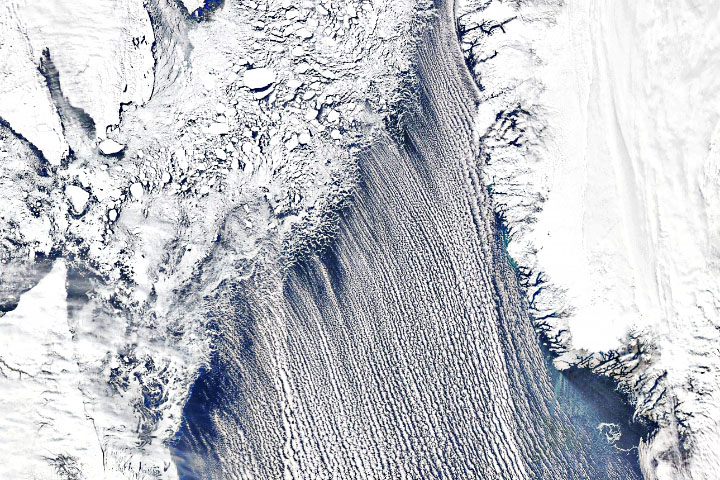 Deception Island is one of the only places in the world where ships can sail directly into the center of an active volcano.

Bouvet Island is known as the most remote island in the world; Antarctica, over 1600 kilometers (994 miles) to the south, is the nearest land mass. Located near the junction between the South American, African, and Antarctic tectonic plates, the island is mostly formed from a shield volcano—a broad, gently sloping cone formed by thin, fluid lavas—that is almost entirely covered by glaciers.