A Moving and Falling Target 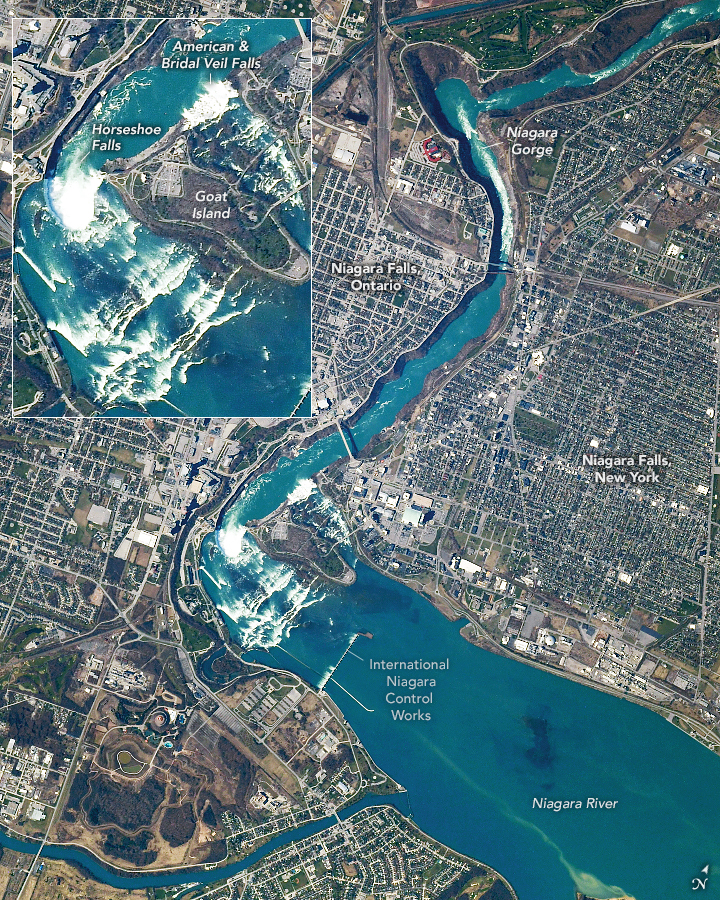 In this photograph taken by a cosmonaut on the International Space Station, the water cascading through Niagara Gorge and the three waterfalls between Niagara Falls, New York, and Niagara Falls, Ontario, are easily identified by their white foam and spray. Shadows accentuate the depth of the canyon that the Niagara River has carved over the past 12,000 years. Meanwhile, the falls are slowly receding upstream as erosion whittles away the underlying rock.

More than 750,000 gallons of water flows from the Lake Erie basin, over the falls, and into the Lake Ontario basin every second. Goat Island and Luna Island sit in the middle of the Niagara River and divert the channel into three distinct falls. The largest, Horseshoe Falls, has not always had its namesake shape. What once was a gentle crescent has become a deep horseshoe as the middle of the ledge has retreated more quickly than the edges. The other two falls, American and Bridal Veil, were conjoined until the waterfall line receded into Luna Island. The land now acts as a separator between the two watery curtains.

While the falls and river channel were long in the making, the human influence on the region is relatively recent. Since the 1950s, the U.S. and Canada have undertaken projects to preserve the falls from further erosion and to harness the hydroelectric power of the flow. The International Niagara Control Works is a water diversion mechanism designed to send more water toward the American and Bridal Veil falls and to channel some of it toward power plant intakes. The U.S. and Canadian power stations near the falls are a critical part of the region’s energy supply.

Astronaut photograph ISS064-E-53177 was acquired on April 2, 2021, with a Nikon D5 digital camera using a focal length of 1000 millimeters. It is provided by the ISS Crew Earth Observations Facility and the Earth Science and Remote Sensing Unit, Johnson Space Center. The image was taken by a member of the Expedition 64 crew. The image has been cropped and enhanced to improve contrast, and lens artifacts have been removed. The International Space Station Program supports the laboratory as part of the ISS National Lab to help astronauts take pictures of Earth that will be of the greatest value to scientists and the public, and to make those images freely available on the Internet. Additional images taken by astronauts and cosmonauts can be viewed at the NASA/JSC Gateway to Astronaut Photography of Earth. Caption by Alex Stoken, Jacobs, JETS Contract at NASA-JSC.

Shadows accentuate the depth of the canyon that the Niagara River has carved over the past 12,000 years. 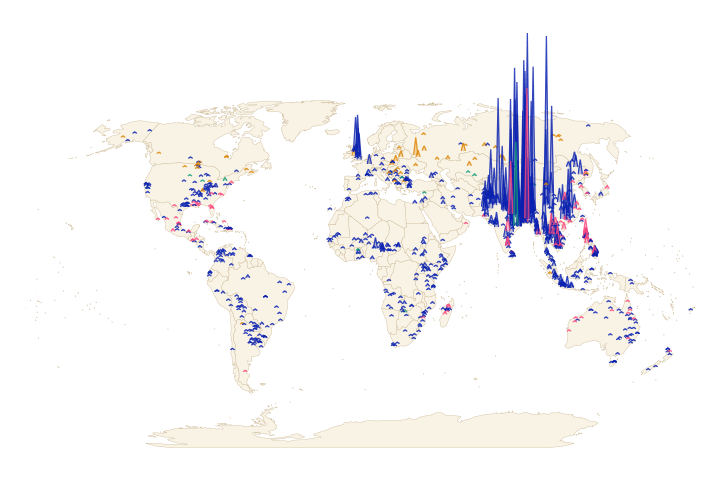 This natural-color image of Hells Canyon was captured by NASA’s Landsat-7 satellite on September 19, 2002. The image shows the northern part of the canyon, where the Imnaha River joins the Snake River.

You can almost sense the invisible tectonic forces within the Earth when you look at this geological icon from space.