The strength of hurricane winds often attract the most attention, but meteorologists warn that water is the most dangerous part of a tropical cyclone. Ida is a good example.

Though Ida’s winds weakened after making landfall in Louisiana, the storm system upended daily life for millions of people and proved deadly for some. As it moved northward and joined with another storm system in the Northeast U.S., Ida unleashed destructive flash floods in Delaware, Pennsylvania, New Jersey, and New York. At times the storm poured several inches of rain per hour on areas that were just hit by heavy rains from Tropical Storm Henri.

The animation above shows the atmosphere’s total precipitable water vapor as Ida moved from the Gulf Coast to New England between August 27 and September 2, 2021. The data come from a version of a NASA model known as the Earth Observing System Data Assimilation System (GEOS DAS), which uses satellite data and mathematical representations of physical processes to calculate what was happening in the atmosphere. The areas with the most precipitable water vapor appear dark blue. The natural-color image below shows the remnants of Ida over the Northeast as observed on September 1 by the Visible Infrared Imaging Radiometer Suite (VIIRS) on Suomi NPP. 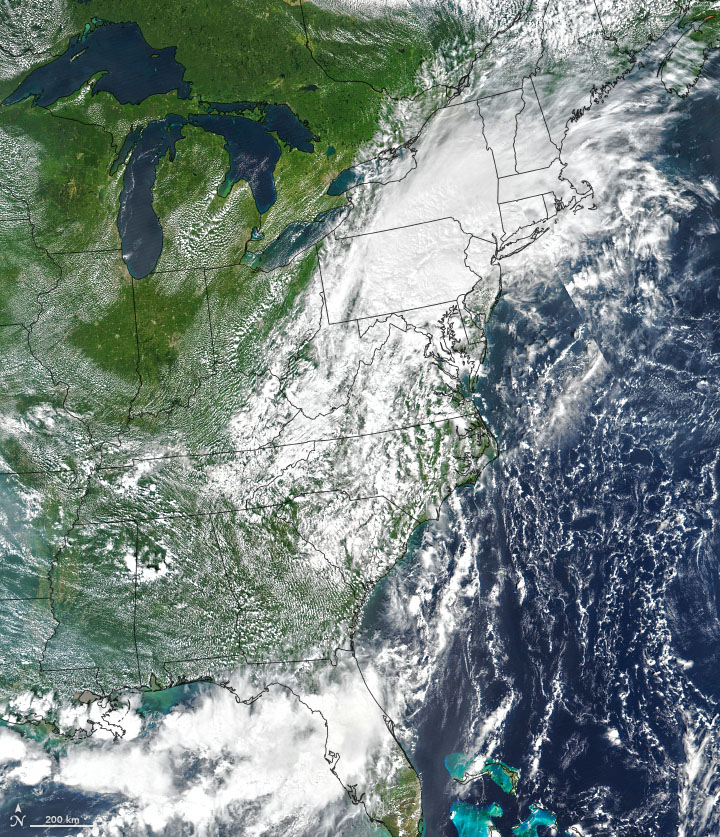 Rain gauge data indicate that many of the worst-hit areas saw 6 to 10 inches (15 to 25 centimeters) of rain fall in just a few hours, a deluge that quickly turned streets into rushing rivers and buildings into islands. Due to the extreme conditions, the National Weather Service (NWS) even issued flash flood emergency warnings for New York City and parts of New Jersey. These alerts are reserved for “exceedingly rare situations when a severe threat to human life and catastrophic damage from a flash flood is happening or will happen soon,” according NWS. The flooding has caused more than two dozen deaths, according to news reports.

Rivers in Pennsylvania and New Jersey broke all-time records for water levels. In southeastern Pennsylvania, East Brandywine Creek rose as high as 19 feet, smashing the previous high-water mark of nearly 14 feet, which was set during Hurricane Floyd in 1999. In Wilmington, Delaware, Brandywine Creek swamped urban areas and led to large numbers of water rescues. In New Jersey, the Millstone River at Weston and the Raritan River at Manville both narrowly broke flood records as well. The rainfall total of 8.41 inches at Newark, New Jersey, on September 1 was the highest for any calendar day in Newark records.

The Schuylkill River in Pennsylvania also saw major flooding. With a gauge in Norristown recording a record height of nearly 27 feet (19 feet is considered major flooding), rushing waters shut down highways and swamped homes, businesses, and cars in some parts of Philadelphia. In New York City, Central Park saw 3.15 inches of rain fall in one hour, smashing the hourly record set just days before during Tropical Storm Henri. Floodwater poured into the city’s subway system, basement apartments, and the cars of stranded motorists.

In a recent report from the Intergovernmental Panel on Climate Change, scientists drew an unequivocal link between human activity and global warming. They also pointed to an observed increase in the intensity and frequency of heavy precipitation events in eastern North America as a consequence of warming. Scientists project that an increase in both mean and extreme precipitation is very likely in the future.

Many of the worst-hit areas in Delaware, Pennsylvania, New Jersey, and New York saw 6 to 10 inches of rain fall in just a few hours.

In January 2020, three days of heavy rain led to flash floods across provinces in southern Iran.