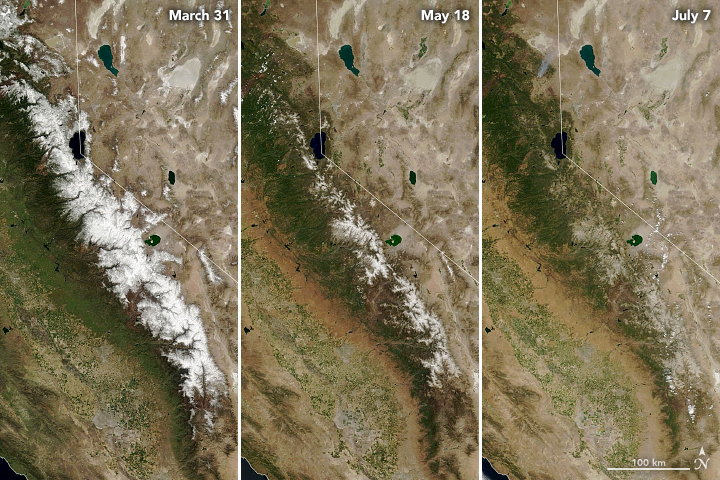 Mountain snow is like a bank account for water across the western United States. Snow that falls on the Sierra Nevada, the Rocky Mountains, and other ranges becomes a natural reservoir that slowly melts each spring and summer and flows down into the river valleys. The resource managers of western states count on this allowance from nature to fill reservoirs with sufficient water for the typically dry months of summer and autumn. In 2021, those meltwater accounts have been turning up “insufficient funds.”

According to the California Department of Water Resources (CalWater), about three-quarters of the state’s precipitation in a year falls as snow and rain in Northern and Central California. In a typical year, Sierra Nevada snowpack accounts for about 30 percent of California’s water supply. Yet for the second year in a row, winter snowfall in the Sierra Nevada was below average. In fact, CalWater reported on April 1, 2021, that the mountains had received just 59 percent of their average yearly snow water; rainfall at lower elevations was also below 50 percent of normal.

The progression is noted in the images above and below. Acquired with the Moderate Resolution Imaging Spectroradiometer (MODIS) on NASA’s Terra satellite, the natural color images show the Sierra Nevada on March 31 (at the seasonal peak), May 18, and July 7 (the most-recent cloud-free day). MODIS images from July 12, 2017, and July 12, 2019—years with average to abundant snow accumulation—also show how snow cover can sometimes last well into summer. (Click here to compare 2021 with 2019.) 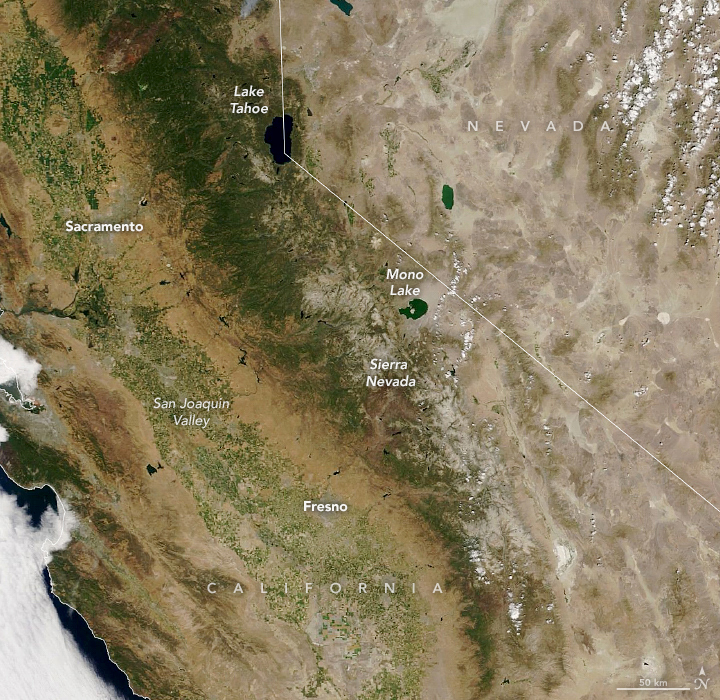 According to state and federal scientists, melting in 2021 in the Sierra Nevada occurred three to four weeks earlier than usual. And that snowmelt did not go far. Parched by two years of drought, the soils between the mountains and the valleys soaked up vast quantities of water. According to hydrologists’ estimates, 685,000 acre-feet of expected water runoff never reached reservoirs in the Northern Sierra watershed. That loss is about 40 percent more water than the city of Los Angeles uses in a year.

In a July 8 report, climatologists with the U.S. National Integrated Drought Information System noted that much of California and Nevada are missing 0.5 to 1 years’ worth of precipitation since October 2019, and California is missing more than 1.5 years’ worth of streamflow. Many reservoirs in California are the lowest they have been since the 2012–15 drought. State and federal managers have banked and conserved enough water from recent years that there is no immediate concern about water shortages in California, but another snow drought this winter could pose problems.

Mountain snow melted away nearly a month ahead of schedule, leaving reservoirs without their usual inflow of freshwater. 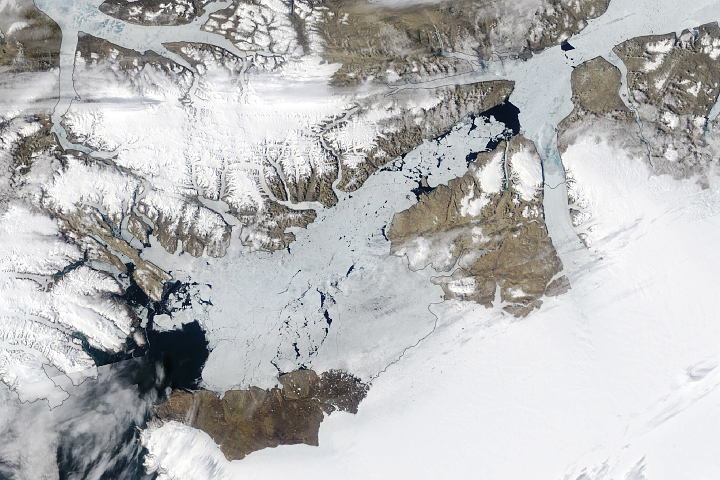 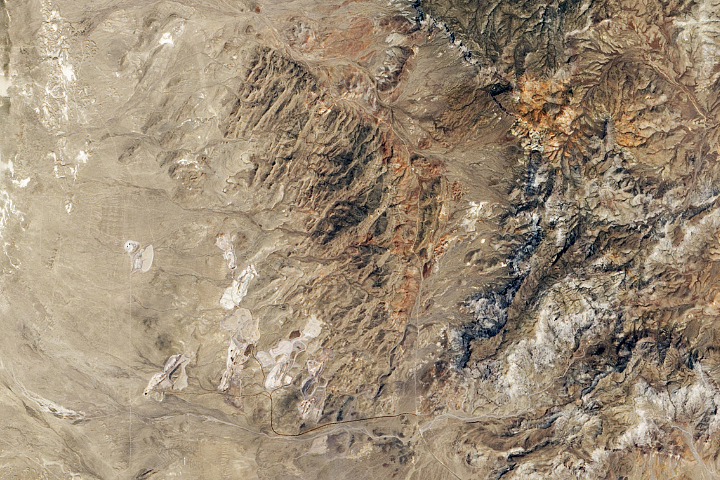 The California mountain range alternated between extreme precipitation and none at all this winter.

Acquired December 2, 2009, this image shows show area around the Olympic Village in Vancouver, British Columbia. Images on the right are close-up views.

Thanks to a series of drought-busting storms, the mountain range has unusually thick and extensive snow cover this year.