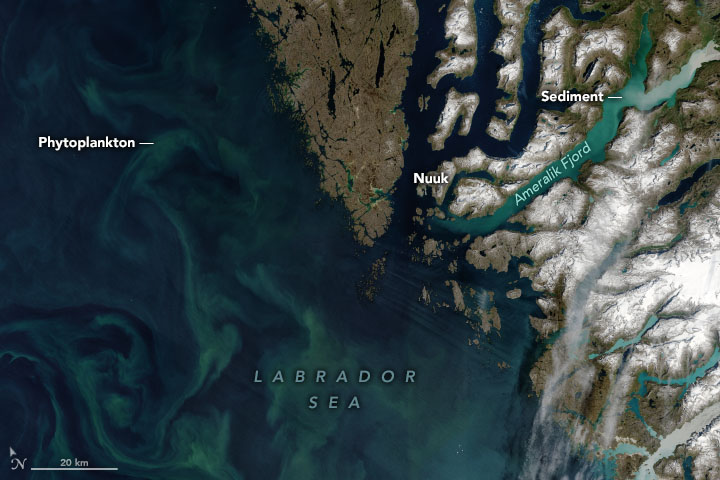 In research published in 2017, scientists reported that summer pulses of freshwater from melting glaciers along Greenland’s southwest coast often coincide with phytoplankton blooms. The flow of fresh meltwater out to sea carries nutrients that can sustain and promote abundant growth of the floating, plant-like organisms that form the center of the ocean food web.

That appears to be what was happening in the waters off of Nuuk, Greenland, when the Operational Land Imager (OLI) on Landsat 8 flew over on July 8, 2021. Close to the coast, the water in Ameralik Fjord and other inlets is stained chalky tan and gray by sediments and glacial flour—rock that has been ground to powder by the ice sheets. Offshore in the Labrador Sea and Davis Strait, light green swirls indicate the presence of phytoplankton in summer bloom. (Chlorophyll measurements confirm this.)

The waters of the Labrador Sea, Davis Strait, and Baffin Bay—between Greenland and Nunavut, Canada—form a transitional zone between the Arctic and Atlantic oceans. Fresh meltwater from the ice sheets and strong regional tides (which promote nutrient mixing) help make these waters biologically rich, particularly in summertime. The abundant phytoplankton draw in copepods and other grazers that ultimately feed shrimp, cod, and other species up to the size of whales.

In the 2017 paper, Stanford University ocean scientist Kevin Arrigo and colleagues noted that summer blooms tend to start in early July and can extend as far as 300 kilometers (200 miles) offshore from Greenland. Fed by sunlight and water rich in iron, silicate, and phosphorous, the blooms account for about 40 percent of annual net primary production for the region.

Blooms in high-latitude and Arctic waters are happening more often and lasting longer, according to another study published in 2020 by Arrigo’s research group. Incorporating satellite data from NASA’s SeaWiFS and MODIS instruments, they found that the rate of growth of phytoplankton biomass across the Arctic Ocean increased by 57 percent between 1998 and 2018. The study contradicted an older idea that increasing glacier melting might lead to fewer nutrients and blooms. 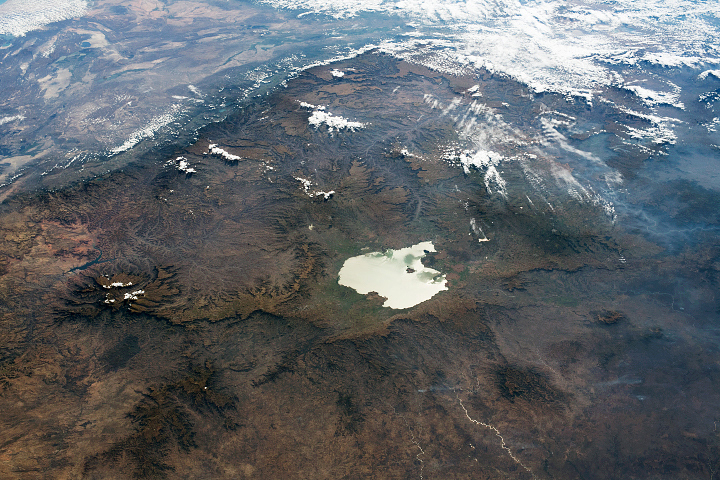 Bloom in the Norwegian Sea

The brilliant shades of blue and green that fill the waters near the Norwegian shore in this photo-like image are likely phytoplankton.

The floating plant-like organisms are showing up in higher concentrations across the Arctic Ocean.