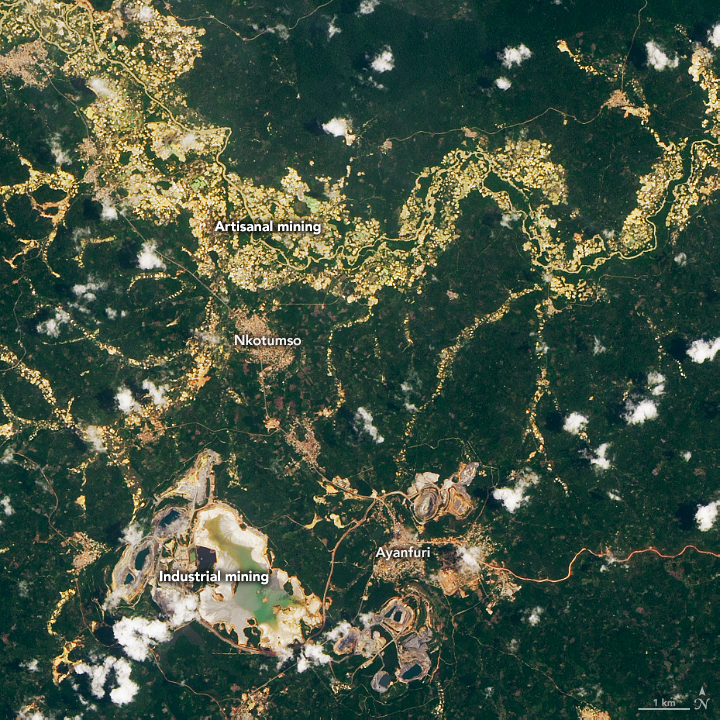 People have been mining for gold in Ghana for centuries. Long before European colonists set foot in the area in the 1400s, Ghanaians looked for gold with pickaxes, shovels, and pans. They washed or “panned” for gold along river banks or dug holes on the surface to find deposits of gold dust and nuggets. Serious indigenous miners dug deep tunnels—records indicate some up to 80 feet deep.

A version of this small-scale mining persists—known today as artisanal mining—but new research shows it is having a growing and sometimes devastating effect on the environment. Researchers from NASA, U.S. universities, and government agencies in Ghana recently used satellite data to estimate the extent of vegetation lost to artisanal mining in the southwestern portion of the country, where the majority of gold mining takes place. They found artisanal mining accounted for 25 percent of vegetation loss in the region from 2005-2019.

“The accumulation of the small-scale mines across the landscape is startling. The deforestation impact is huge compared to industrial mines,” said Abigail Barenblitt, the main author of the study and data analyst in the biosphere sciences lab at NASA’s Goddard Space Flight Center. Although it only accounts for about one-third of the country’s gold production today, artisanal mining caused seven times more deforestation than industrial efforts between 2007-2017.

The natural-color image above shows a large-scale mine and several artisanal mines in the Central Region of Ghana. The image was captured on March 29, 2020, by the Operational Land Imager (OLI) on Landsat 8. The mines lie within the Ashanti gold belt, one of the richest gold regions in West Africa.

The differing impact of artisanal and industrial mines is related to the process of gold extraction, said study co-author Amanda Payton of East Carolina University. Large-scale industrial mines use heavy machinery to dig deep in a concentrated area. Industrial miners are also sometimes required to fill the holes in the landscape after extraction in order to help with remediation.

Because they typically do not have heavy-duty equipment, artisanal miners tend to dig many shallow holes across large swaths of land. They extract and process gold at the site and then move onto the next area. They usually do not refill holes after extractions. And they often use mercury to remove gold from sediments, which can lead to serious health problems and long-term water and soil contamination. Unregulated artisanal mining is locally known as galamsey, derived from the Ghanaian words “gather” and “sell.” 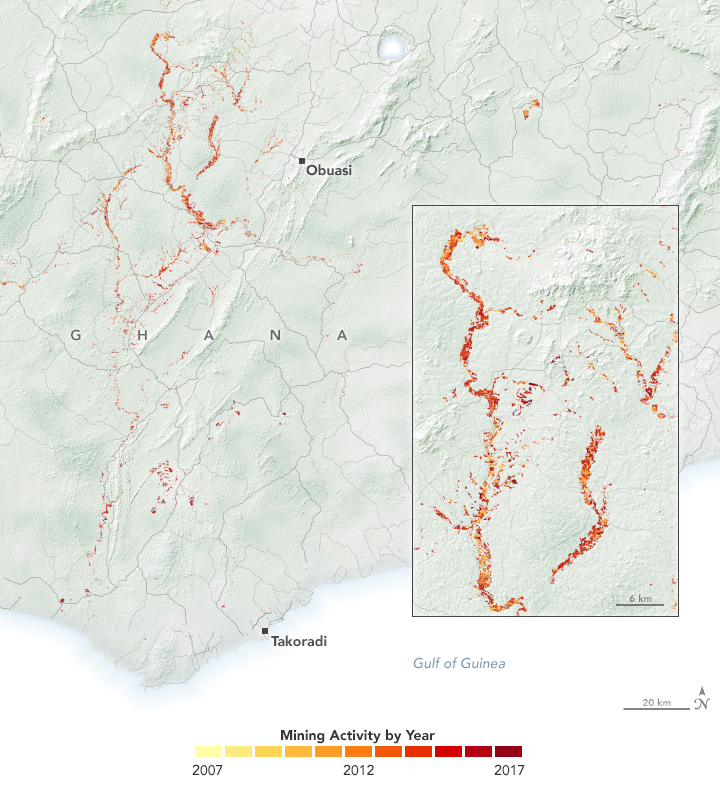 “Artisanal mining has a quicker turnaround time on the landscape, with operations excavating a shallower area and then moving on to another section of the river. Some of the artisanal mines stretch for great distances along rivers,” said Payton. “With industrial mining, more research into the gold deposits is done and more resources are committed to a single area of land to excavate deeper.”

Barenblitt, Payton, and colleagues worked with the Ghana Space Science and Technology Institute and Ghana Statistical Service to determine the total footprint of vegetation loss to artisanal gold mining. They analyzed decades of Landsat data, creating a machine-learning algorithm to classify any vegetation loss in one of four categories: mining, urban development, water, and other (agriculture, bare soil, etc.). The team found more than 160,000 hectares (400,000 acres) of vegetation were lost from 2005-2019. About 28 percent was lost to both industrial and artisanal gold mining, while 29 percent was lost to urban development. About 17 percent was converted to water, mainly due to the formation of a lagoon complex. The remaining 25 percent was attributed to the “other” category of land losses.

The team further classified mining as large-scale industrial or small-scale artisanal by looking at elevation data and the texture of the landscape. Industrial mines have larger elevation changes since they dig deeper into the surface. Highly textured landscapes tend to indicate artisanal mining due to the small holes compared to wider, smoother industrial areas. Artisanal mines accounted for 85.7 percent of vegetation loss, while industrial mines accounted for 14.3 percent from 2005-2019.

The team also calculated artisanal mining activity by year to pinpoint its rise in popularity over the past decade. The map above shows new mining activity over a subset of the study period from 2007 to 2017 near Kumasi, Ghana. (The researchers chose 2007 to 2017 to focus on years with sufficient cloud-free imagery to identify annual changes.) Darker orange and red represent more recent activity. At least 700 hectares (1,700 acres) of loss occurred in protected zones. The graph below shows the amount of artisanal and industrial mining by year. 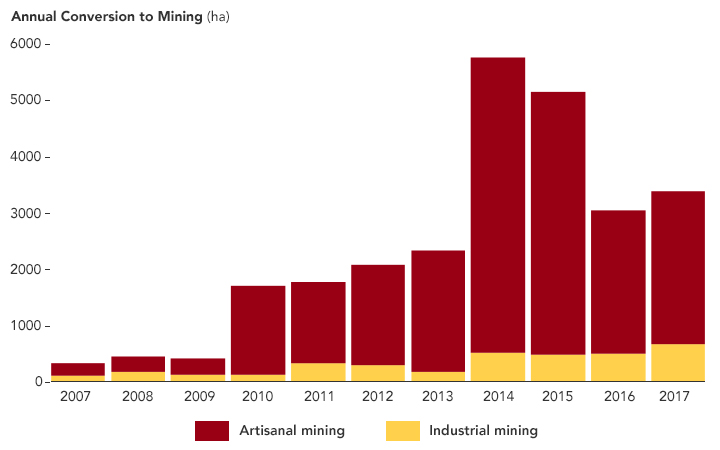 “There has definitely been an expansion of small-scale mining by more people over time because of the price of gold,” said Lola Fatoyinbo, a forest ecologist at NASA’s Goddard Space Flight Center and a contributor to the study. “The high gold prices probably made artisanal mining worth the labor.” The team calculated a correlation between gold prices and annual mining conversion after a two-year lag. Over the study period, the value of gold jumped from about $700 per ounce to as high as $1,700 in 2012; it is now nearly $1,800 per ounce.

The team’s next step is to automate their image analysis process so new mining can be detected quickly by African and international organizations addressing the issue. This research is part of larger efforts across NASA to detect unregulated gold mining in Ghana. The team has collaborated and compared methods with researchers of SERVIR-West Africa, a program between NASA and the U.S. Agency for International Development (USAID). SERVIR-West Africa uses similar mining analyses and shares the data to government officials to help curb artisanal activities and reform past mining sites.

Ghana by the Sea

The coast of the tropical Africa nation is shaped by a confluence of rivers, lagoons, and bays. 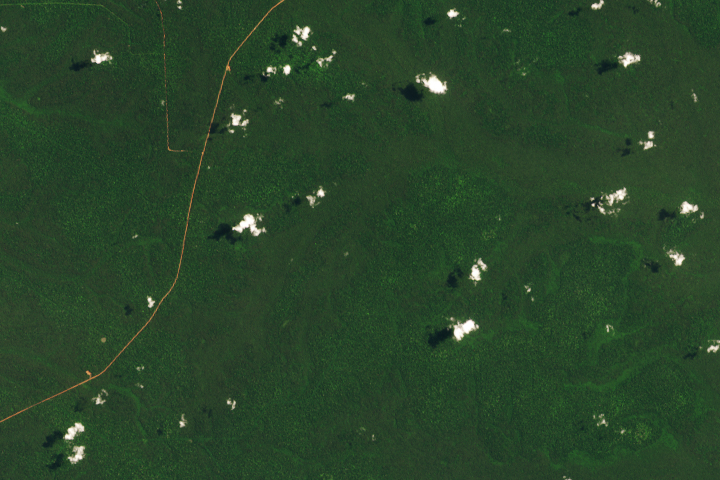 When a Road Leads to Deforestation

Road networks in the Congo rainforest have significantly increased over the past decades, but not all paths lead to long-term destruction.