Picturing Earth: Eye of the Beholder

Editor’s Note: This text is the transcript from the video Picturing Earth: Eye of the Beholder.

Over the past 60 years, astronauts have shot more than 1.5 million photographs of Earth from the International Space Station and other spacecraft. Most have been catalogued by the Earth Science and Remote Sensing (ESRS) unit at NASA’s Johnson Space Center. We asked the ESRS team and astronaut Jeff Williams (ISS expeditions 13, 21/22, and 47/48) to share a few of their favorite views from the space station era.

So, I have lots of favorites. One is fairly well known because the story’s been told of an erupting volcano in 2006 off the coast of Alaska. It had just started. I captured the entire plume. I got it by accident. I was just taking pictures of one island, the next island, the next island. Something in the back of my head said that last one didn’t look right. I went back and reframed it and there was this volcano erupting.

Will Stefanov, ISS program scientist for Earth Observations, on auroras:

The time-lapse imagery that we’ve been able to get of aurora is just fascinating to watch, and just strikingly beautiful. Just to be able to see that process, seeing how the aurora shifts and moves like a live thing. And just knowing that for that particular stretch of time you are pretty much seeing what the crew saw in orbit.

Williams on the Grand Canyon:

The Grand Canyon was one of my favorites. If I wanted to film a length of the canyon, if I wanted to get the detail with the big lens...I took a shot, immediately took another shot, another shot—a series of them in a very short duration of time, say seconds—then later you can take a software package and stitch them together. And then you get the mosaic, you get them all.

Something I had never known about or seen before astronaut photography is all the fishing boats in Southeast Asia. I was scrolling through and I saw all these bright green lights in these photos, and I thought: “Okay, is that a lens artifact? Is that a reflection of the camera of some sort?” And I was like: “No, there’s too many, it’s too scattered, and it’s a huge photo.” And then I just simply looked it up and saw: “Oh! This is a known thing: fishing boats with these bright green lights.”

So I like a lot of the nighttime imagery. You know: city lights, lightning. But I think one of the images that most surprised me is these really boring images we got. They’ve got the black Earth because it’s dawn or dusk. The horizon is kind of an orangey red. Above that it’s a little bit of blue and then you can see space above it. I finally asked somebody: “What are these pictures that we’re taking?”

Some of them just don’t happen to have anything in them. The astronaut took a picture because the conditions are right. Others of them have mesospheric clouds. And they look different than normal clouds, they’re way up there and it has this kind of texture to them. Apparently they weren’t discovered until we had people in space to take pictures of them.

My last flight three years ago I was able to catch a glimpse of noctilucent clouds with a texture, a density of texture like I had never seen before. I got some great overlapping shots. Then later I was able to stitch together and get this wide panorama of this just richly textured noctilucent clouds, which are very unique and very beautiful.

So, getting to know the planet has been a constant interest, and sometimes very beautiful. I have an interest in places that are remote. And then it parlayed into the bigger issue of the megafans, which nobody had tumbled to.

Megafans are large fan-shaped deposits stretching across an inland landscape. They are built by many stream flows emanating from a single source.

I spent 10 years getting to know the planet, and now I do know it. At least through a 400- to 50-millimeter lens. And that has been a most wonderful discovery.

We asked a space station team and an astronaut to share a few of their favorite views from above. 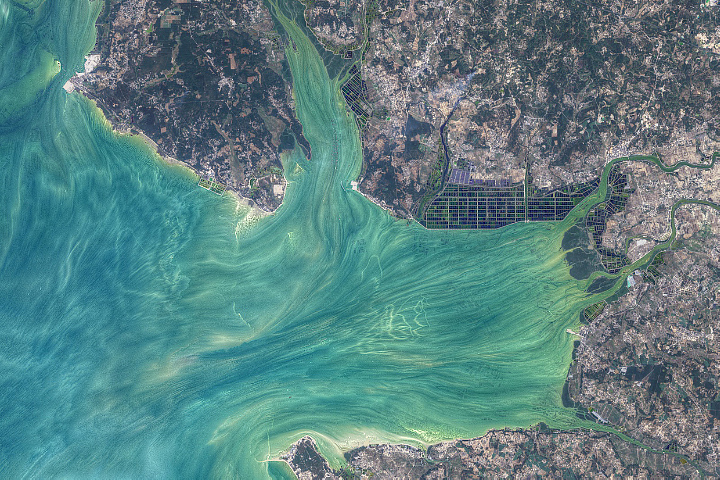 Astronauts will continue to photograph their home whether from low-Earth orbit or, as the Apollo astronauts once did, from the Moon.

The above photo of the International Space Station was taken by an astronaut aboard the space shuttle on April 17, 2002. Although its construction is not yet complete, Space Station Alpha began operations in November 2000. It now serves as home to three astronauts as well as dozens of already ongoing science experiments.