Hints of a Recent Eruption 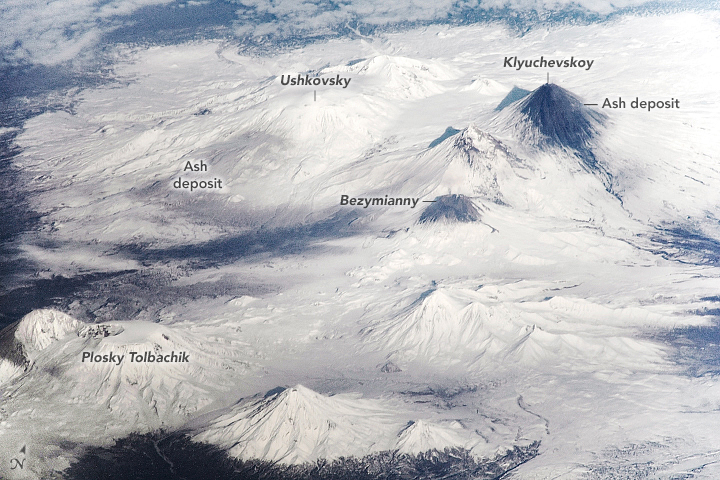 The Kamchatka Peninsula of far eastern Russia has more than 300 volcanoes, 29 of which are active. This photo, taken by an astronaut onboard the International Space Station, captures a few of the region’s active volcanoes—with some showing signs of recent eruptions. The photo was taken at a highly oblique angle with a long camera lens, giving a strongly three-dimensional perspective of the towering peaks.

In this snow-covered landscape, the peaks of Klyuchevskoy and Bezymianny volcanoes are notably darker. The astronauts were able to see evidence of ash deposits from recent eruptions. Days before this photo was taken, Bezymianny had a significant ash eruption that was recorded by the Kamchatka Volcanic Eruption Response Team. The plume drifted northwest and deposited ash in the valley between Bezymianny and Ushkovshy volcanoes.

Photographing an ongoing volcanic eruption anywhere on Earth is a matter of luck for most astronauts, but Klyuchevskoy is so active that it has actually been captured spewing ash several times. In 1994, astronauts on the STS-068 mission on Space Shuttle Endeavour captured a large eruption at Klyuchevskoy using a Hasselblad film camera. More recently, astronauts on the ISS took a similar oblique shot of a long plume extending from the volcano in 2013.

Given the ongoing activity on Kamchatka Peninsula and the continued presence of humans in low-Earth orbit, the chances of photographing another volcanic eruption may just be an orbit away.

Astronaut photograph ISS064-E-319 was acquired on October 23, 2020, with a Nikon D5 digital camera using a 1200 millimeter lens and is provided by the ISS Crew Earth Observations Facility and the Earth Science and Remote Sensing Unit, Johnson Space Center. The image was taken by a member of the Expedition 64 crew. The image has been cropped and enhanced to improve contrast, and lens artifacts have been removed. The International Space Station Program supports the laboratory as part of the ISS National Lab to help astronauts take pictures of Earth that will be of the greatest value to scientists and the public, and to make those images freely available on the Internet. Additional images taken by astronauts and cosmonauts can be viewed at the NASA/JSC Gateway to Astronaut Photography of Earth. Caption by Andrea Meado, Jacobs Technology, JETS Contract at NASA-JSC.

Photographing an ongoing volcanic eruption anywhere on Earth is a matter of luck for most astronauts, but Kamchatka provides its share of opportunities.

The underwater volcano near the Canary Islands is growing ever closer to the water surface.

Image of the Day Water Volcanoes