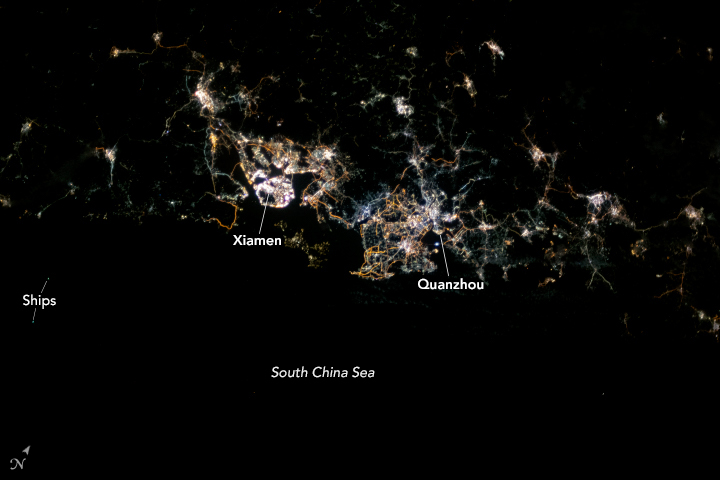 This photograph, taken by an astronaut from the International Space Station (ISS), captures the bright urban lights of two Chinese port cities. Xiamen and Quanzhou stand out amidst a complex network of roads and railways and the night-darkened waters of the South China Sea.

Inland areas are mountainous here, with less urban development to illuminate the landscape. Smaller towns and roads zig-zag through the valleys. Closer to the coast, several islands and small harbors make up one of China’s most highly trafficked port regions. Offshore, two bright clusters of pixels are likely ships traveling to or from one of the harbors.

The ancient city of Quanzhou was once one of the most important ports along the Maritime Silk Road. Beyond its role as a major center of commerce and trade, Quanzhou remains a major manufacturing center in China.

Astronaut photograph ISS060-E-60237 was acquired on September 12, 2019, with a Nikon D5 digital camera using a 50 millimeter lens and is provided by the ISS Crew Earth Observations Facility and the Earth Science and Remote Sensing Unit, Johnson Space Center. The image was taken by a member of the Expedition 62 crew. The image has been cropped and enhanced to improve contrast, and lens artifacts have been removed. The International Space Station Program supports the laboratory as part of the ISS National Lab to help astronauts take pictures of Earth that will be of the greatest value to scientists and the public, and to make those images freely available on the Internet. Additional images taken by astronauts and cosmonauts can be viewed at the NASA/JSC Gateway to Astronaut Photography of Earth. Caption by Laura Phoebus, Jacobs Technology, JETS Contract at NASA-JSC.

Bright lights of these coastal cities of China are sandwiched between mountains and the sea.

Through Italy’s Smart Road Decree, the city was chosen as a test site for autonomous driving vehicles.

City lights trace the outline of Italy's “boot” and the island of Sicily.

Haifa By Day and By Night

Astronauts are taught to concentrate on the shapes of coastlines for a visual cue about where they are when circling the planet. The nose of Cape Karmel and the bay that protects Haifa are shapes that stand out.