A Dust Plume to Remember 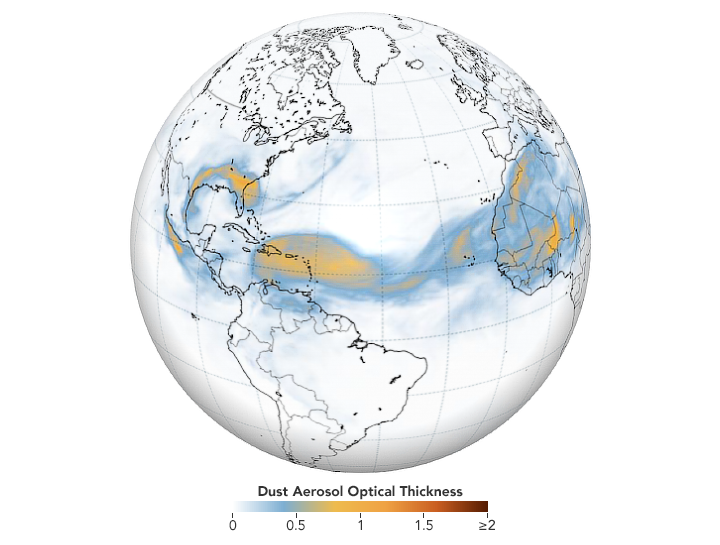 Winds routinely drive clouds of Saharan dust out of West Africa and across the Atlantic Ocean in the summer. But the intensity and extent of a plume that departed Africa in June 2020 was so great that it had internet meme-makers buzzing about a “Godzilla” dust cloud. From the International Space Station, NASA astronaut Doug Hurley described the vast ribbon of dust as “amazing.” And as dust blanketed the Caribbean Sea and darkened skies in several states in the U.S. Southeast, several meteorologists called the event “historic.”

Such superlatives are backed by data. One preliminary analysis of aerosol optical depth (AOD) measurements from NASA’s Moderate Resolution Imaging Spectroradiometer (MODIS) sensor showed a greater concentration of dust in the atmosphere over the Atlantic Ocean on June 20 than on any other day since 2003. AOD is a unitless measurement of how much light the airborne particles prevent from traveling through the atmosphere. A few days later, a ground-based AERONET sensor at Ragged Point, Barbados, recorded the all-time highest AOD value the site has recorded since 1996.

The plumes in June 2020 spanned thousands of kilometers. When the leading edge arrived in Puerto Rico and skies turned a hazy yellow-gray, beaches were closed and air quality plummeted. “This is the most significant event in the past 50 years,” Pablo Méndez-Lázaro, a University of Puerto Rico scientist told the Associated Press. “Conditions are dangerous on many Caribbean islands.” Méndez-Lázaro is working on a NASA applied sciences project to develop an early warning system for poor air quality in the region. 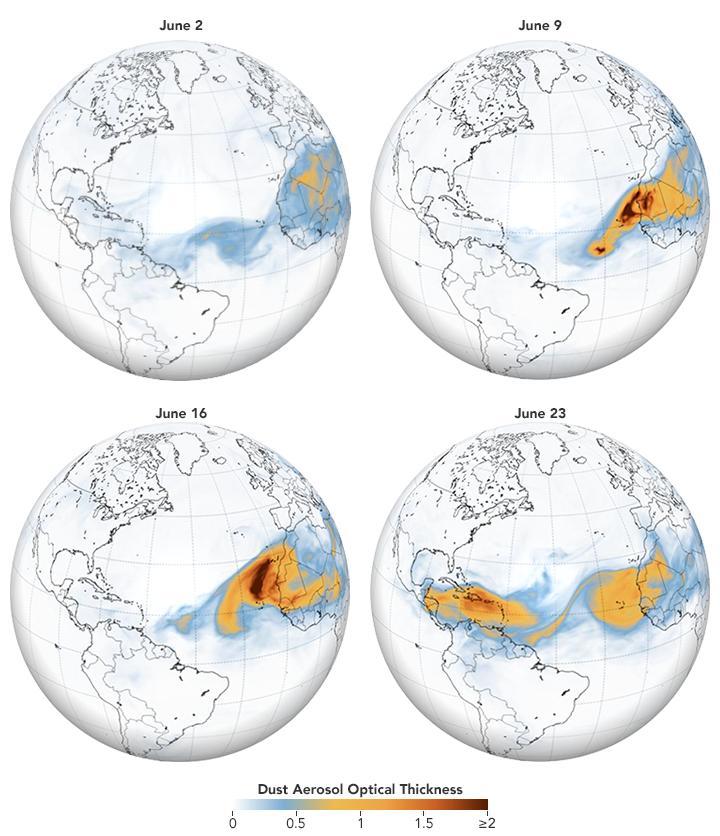 The sequence of images above, based on data from NASA’s Goddard Earth Observing System (GEOS) modeling system, shows pulses of Saharan dust at one-week intervals as they made their way across the Atlantic Ocean. Aside from Cape Verde, which regularly gets doused with dust, the islands in the Caribbean were some of the hardest-hit locations. As the plume reached the United States, the Environmental Protection Agency reported on June 27 that levels of fine particulate matter (PM2.5) had risen enough to reach “unhealthy levels” (between 151-200 on the air quality index) in Florida, Texas, and Georgia.

The data in the transect below reveal the height of the dust over the Dominican Republic as observed by the Cloud-Aerosol Lidar with Orthogonal Polarization (CALIOP) instrument on the CALIPSO satellite on June 23, 2020. Reaching roughly 4 kilometers (2.5 miles), the top of the plume was a bit higher than most; there was also plenty of dust at or below 1 kilometer (0.6 miles). As dust crosses the ocean, larger particles fall out first, leaving behind mainly finer and smaller ones, which are especially problematic for human health.

Air pollution experts are not the only specialists who are closely following this event. Meteorologists track dust storms because the dry, dusty air can inhibit the formation of clouds and prevent hurricanes. Infectious disease researchers watch them because dust plumes can be vectors for viral and bacterial diseases. And climate scientists study dust because big events can absorb enough light to affect Earth’s radiation budget.

Others will be watching for impacts on the oceans. “In nutrient-limited waters, iron and other nutrients in dust can trigger phytoplankton blooms with wide-ranging effects,” explained Hongbin Yu, a scientist at NASA Goddard Space Flight Center. Phytoplankton are critical to marine food webs and play an important—though little understood—role in the carbon cycle. “In this case, I do not expect to see much of a response from the Gulf of Mexico, which already has plenty of nutrients. But we could see a major response in a few weeks if enough dust passes over Central America and ends up in the more nutrient-limited waters of the eastern Pacific.”

NASA Earth Observatory images by Joshua Stevens, using GEOS-5 data from the Global Modeling and Assimilation Office at NASA GSFC and data from the CALIPSO team. Story by Adam Voiland.

While dust routinely blows across the Atlantic Ocean, scientists rarely see plumes as large and dense with particles as the one that darkened Caribbean skies in June 2020.

Image of the Day Atmosphere Dust and Haze Remote Sensing 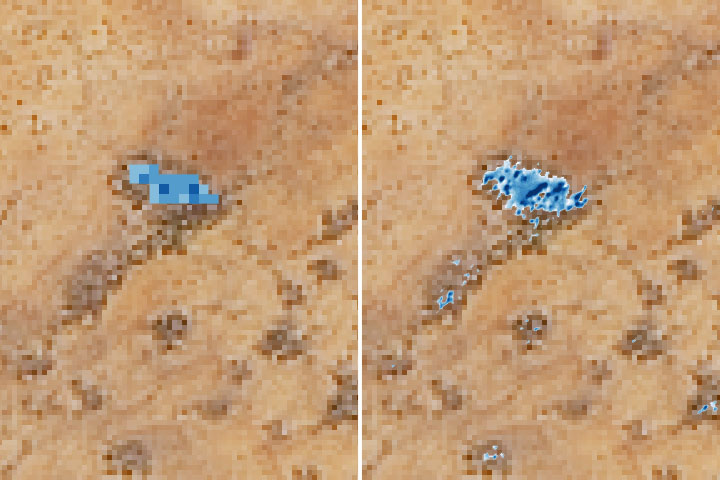 Dust Storm Season in North Africa and the Middle East

Seasonal changes in wind strength and direction can loft copious amounts of dust into the air and carry it across seas and ocean basins.