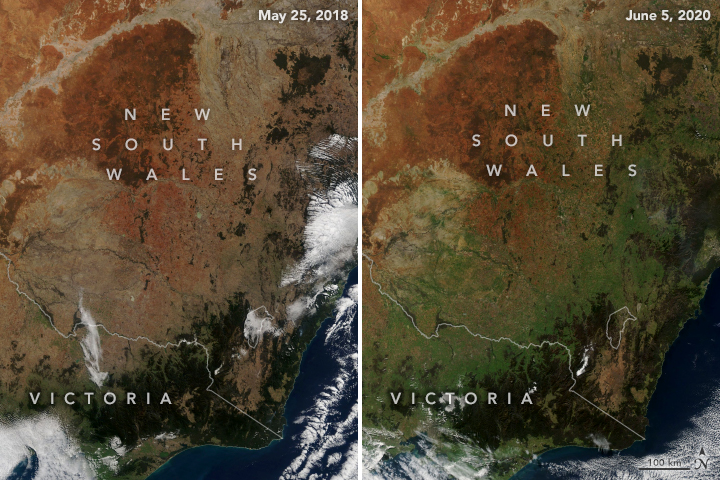 As the 2019–2020 summer brought record heat to Australia, New South Wales appeared to be heading into its third year of severe drought. From January 2017 through October 2019, the southeast Australian state experienced its lowest amount of rainfall in nearly a century. During that time, farmlands were parched, lakes dried up, and millions of fish died.

After more than 34 consecutive months of dry conditions, steady and occasionally heavy rain finally arrived in New South Wales. From January to May 2020, southeastern Australia received above-average rainfall and even broke records in Victoria. According to the Australian Bureau of Meteorology (BOM), April and May 2020 was the first period since 2016 with close to average rainfall in New South Wales and the Murray–Darling Basin. The BOM predicts the upcoming winter (June to August) will also be wetter than average for western New South Wales and parts of South Australia.

The natural-color images above show the greening of the landscape in southeastern Australia in June 2020 (right) compared to May 2018 (left). The images were acquired by the Moderate Resolution Imaging Spectroradiometer (MODIS) on NASA’s Aqua satellite. 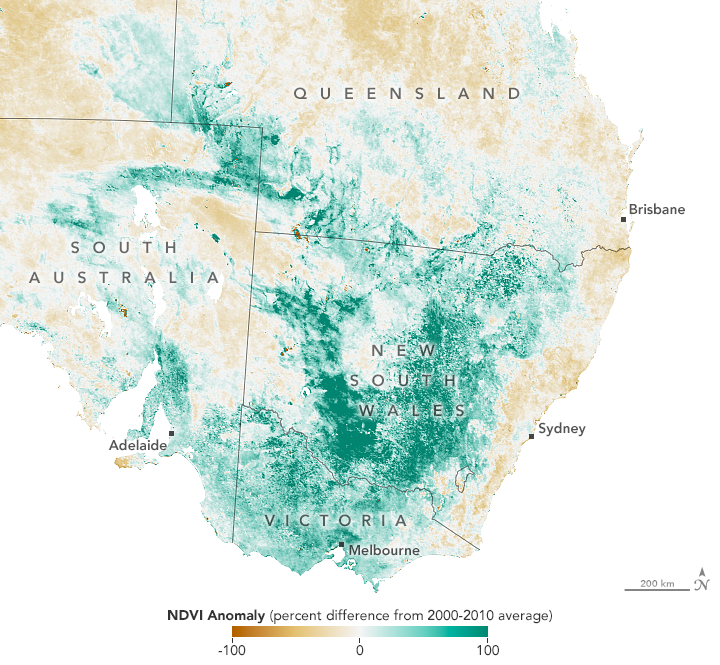 The map above shows Normalized Difference Vegetation Index (NDVI) anomalies; NDVI is a measure of the “greenness” of vegetation. The map depicts the health and abundance of vegetation as observed from May 16 to June 14, 2020, compared to the long-term average (2000-2010) for the month. Brown areas show where plants were more stressed than normal, and greens indicate vegetation that was healthier than normal.

Victoria also experienced record-breaking rain at the beginning of 2020. From January to April, Melbourne received around 400 millimeters (16 inches) of rain—nearly eight times more rainfall than last year during this time period. This is Melbourne’s wettest start of the year since 1924. The BOM predicts Victoria may experience drier than normal weather for the upcoming winter though.

The wet start to 2020 has alleviated short-term water deficiencies in eastern Australia and helped provide a better start to the winter farming season. However, the rainfall has not yet compensated for the effects of the long-term drought, which is still evident in the Murray-Darling Basin. The recent rain has improved water flow in the area, but storage levels are still very low. The BOM stated that it will take several significant rainfall events to erase the long-term rain deficiencies across the region.

Overdue rain changed the landscape of Australia’s capital city of Canberra in October 2010.

Several years of dry conditions have set the stage for a fierce fire season in several southeastern states.