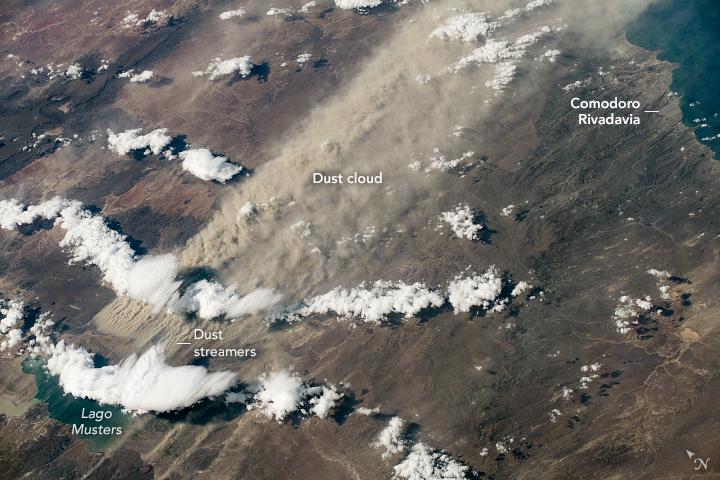 A surging dust storm and trailing dust cloud captured an astronaut’s attention as the International Space Station (ISS) was passing over South America. Dust storms are common in Patagonia and familiar for people in Comodoro Rivadavia, a coastal city in southern Argentina.

The primary source of dust is Lago Colhué Huapí, a shallow lake adjacent to the much deeper Lago Musters. During Patagonia’s dry season, the water levels of Colhué Huapí drop significantly due to evaporation, leaving loose silt exposed at the surface. In this photograph, the lake is almost entirely obscured by dust and clouds. At the western margin of the storm, dust lifted off from the ground in the form of dust streamers, which were aligned with the wind direction. These surface dust features are also observed on Mars.

This striking weather event carried dust more than 120 kilometers (80 miles) east over land and eventually out over Golfo de San Jorge and the Atlantic Ocean. Many studies have shown that such dust activity is a major source of nutrients in the South Atlantic.

The conditions promoting dust storms in the Patagonian desert tend to arise late in the afternoon, after most polar-orbiting satellites have passed overhead (typically at the same local time every day). The orbit of the ISS allows astronauts to view areas of Earth at different times of day, providing unique views of such natural phenomena.

Astronaut photograph ISS062-E-85589 was acquired on March 7, 2020, with a Nikon D5 digital camera using a 170 millimeter lens and is provided by the ISS Crew Earth Observations Facility and the Earth Science and Remote Sensing Unit, Johnson Space Center. The image was taken by a member of the Expedition 62 crew. The image has been cropped and enhanced to improve contrast, and lens artifacts have been removed. The International Space Station Program supports the laboratory as part of the ISS National Lab to help astronauts take pictures of Earth that will be of the greatest value to scientists and the public, and to make those images freely available on the Internet. Additional images taken by astronauts and cosmonauts can be viewed at the NASA/JSC Gateway to Astronaut Photography of Earth. Caption by Andrew Britton, Jacobs, JETS Contract at NASA-JSC.