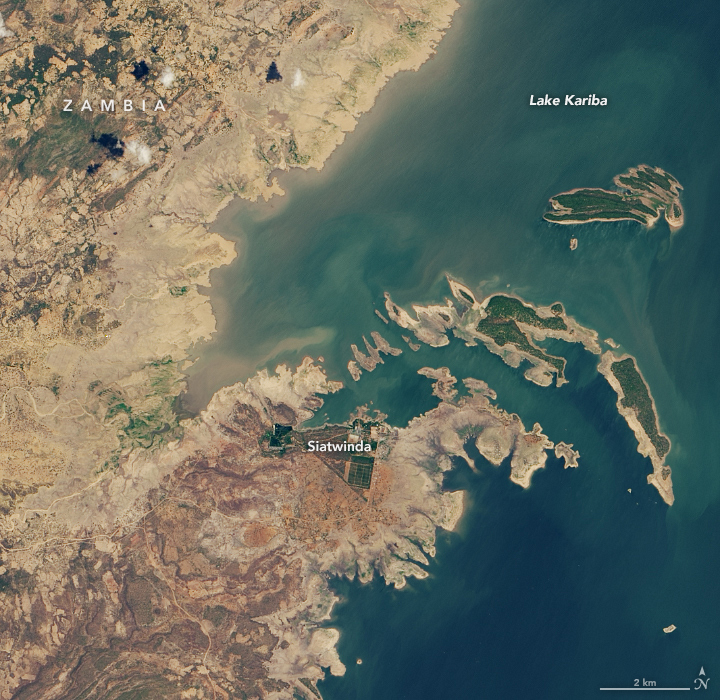 In late December 2019, the world’s largest reservoir—a major source of drinking water and energy in Africa—stood at its lowest level since at least 1996. Water levels on Lake Kariba have fallen steadily as southern Africa has endured a long-term drought.

News media have reported rolling blackouts in the region for as much as 18 hours per day, with the possibility that power generation will have to be shut down altogether if the lake drops much lower. Seasonal rains usually start to refill and recharge the watershed in January and February.

The Operational Land Imager (OLI) on Landsat 8 acquired these natural-color image from the shores of Lake Kariba over the past two Novembers and Decembers. The images at the top and bottom of the page were acquired on November 25, 2018, and November 28, 2019. The middle images were acquired on December 4, 2018, and December 23, 2019. The images come from different dates because the reservoir is so large that it falls within several different overpasses of Landsat 8. Images were also selected for minimal cloud cover in a region that is often cloudy.

Southern Africa is suffering through its worst drought in several decades and perhaps a century. Diminished and late rainfall across the region—roughly 55 to 85 percent of normal for October through December—combined with long-term increases in temperatures, have jeopardized food security and electric power for millions of people in the region.

The world’s largest reservoir now stands at its lowest level since 1996.

Parts of Africa have been plagued by dry seasons growing hotter and rainy seasons arriving later and with less water for crops and livestock.

The Decline of Lake Kariba

Drought has struck a huge reservoir on the border Zambia and Zimbabwe, reducing the hydro power supply from Kariba dam .