Cloud Streets over the Atlantic 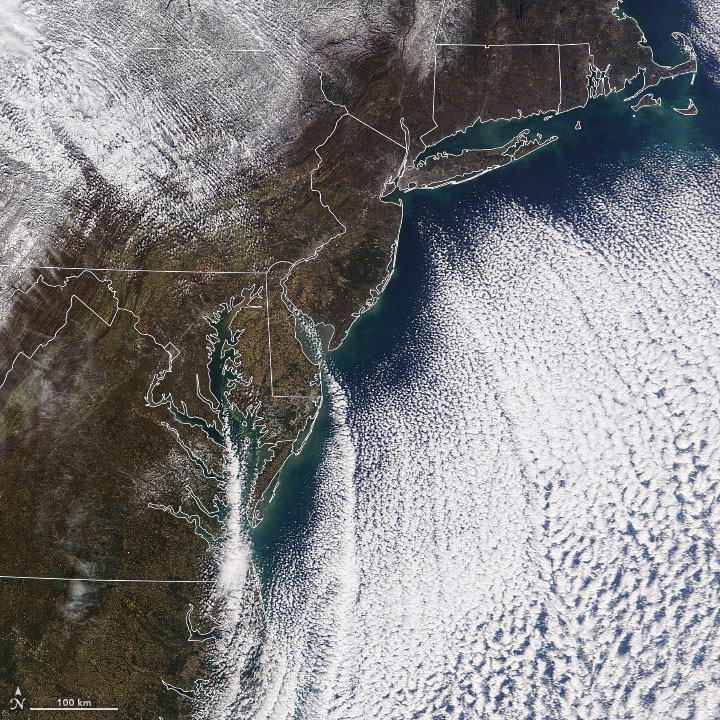 A winter-like chill engulfed the eastern United States in mid-November 2019, with temperatures dipping to record lows in some places. While the weather burdened some people with delays in road and air travel, the view from above was one of serene beauty.

The Moderate Resolution Imaging Spectroradiometer (MODIS) on NASA’s Terra satellite acquired this image on the morning of November 13, 2019. Clouds and snow are visible over parts of Pennsylvania and New York, giving way to clear skies along the coast.

As the cold air mass moved over the relatively warm Atlantic Ocean, it quickly warmed and gained the moisture necessary to form clouds. But these are not your typical cumulus clouds. Notice how they line up in organized rows parallel to the direction of the wind. These “cloud streets” are the result of nature trying to balance differences in energy.

Cloud streets occur when columns of heated air—thermals—rise through the atmosphere and carry heat away from the sea surface. The moist air rises until it hits a warmer air layer (a temperature inversion) that acts like a lid. The inversion causes the rising thermals to roll over on themselves, forming parallel cylinders of rotating air. On the upward side of the cylinders (rising air), water vapor condenses and forms clouds. Along the downward side (descending air), skies remain clear.

Note also how the cloud streets start a bit offshore. This is because the cold air mass needs some time and distance moving over the water to pick up enough moisture for cloud formation.

Cloud streets are not limited to the skies over the open ocean. For example, during cold spells you can frequently see them streaming over the Great Lakes.

Cold air moving over relatively warm ocean water produced a pattern of clouds that lined up in organized rows.

Cloud Streets over the Atlantic and Pacific Oceans

In the midst of a sharp cold snap, the Terra satellite captured this image of cloud streets over the Atlantic Ocean.

Cloud Streets over the Hudson Bay