Landmarks of the Pacific Crest Trail 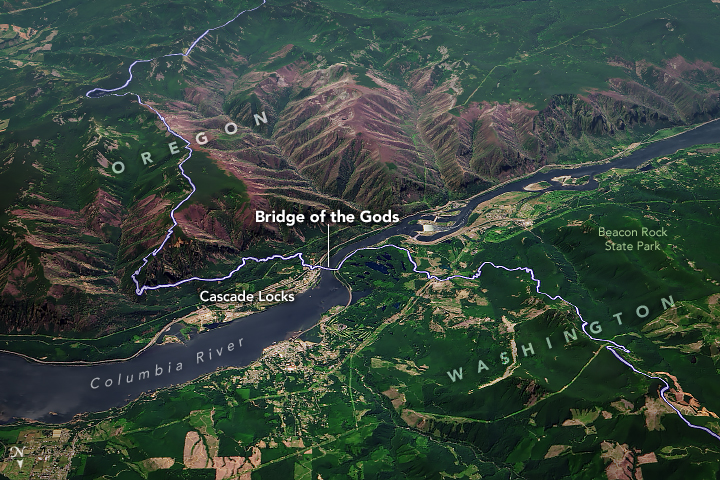 Today’s Image of the Day is an excerpt from our feature story: Trailing the Pacific Crest from Space.

There is no award for completing the walk from Mexico to Canada through California, Oregon, and Washington. But read about the journeys of so-called “thru-hikers” of the Pacific Crest Trail (PCT), and it is clear that the 2,650-mile (4,265-kilometer) hike changes you. Even walking a small segment of trail can connect you with the land, whether you access it in desert, forest, or alpine areas.

The PCT is not the longest or oldest National Scenic Trail in the United States, but it helped set the standard for trails that followed. The remarkable length of the Pacific Crest Trail, passing through 48 wilderness areas and some extremely demanding terrain, is especially apparent from space. NASA Earth Observatory identified locations along the trail where satellites and astronaut photography offer a unique perspective on this great hike.

More than half of the federal land crossed by the Pacific Crest Trail (PCT) is officially designated as wilderness. There is the occasional road crossing, however, such as the Bridge of the Gods. The bridge spans the Columbia River and allows hikers to cross between Washington and Oregon. It also marks the trail’s lowest point, with an elevation just above sea level.

The image above, acquired on June 11, 2019, with the Operational Land Imager (OLI) on Landsat 8, shows the PCT route (purple) across the bridge and beyond. The image is draped over topographic data from NASA’s Shuttle Radar Topography Mission (SRTM) . 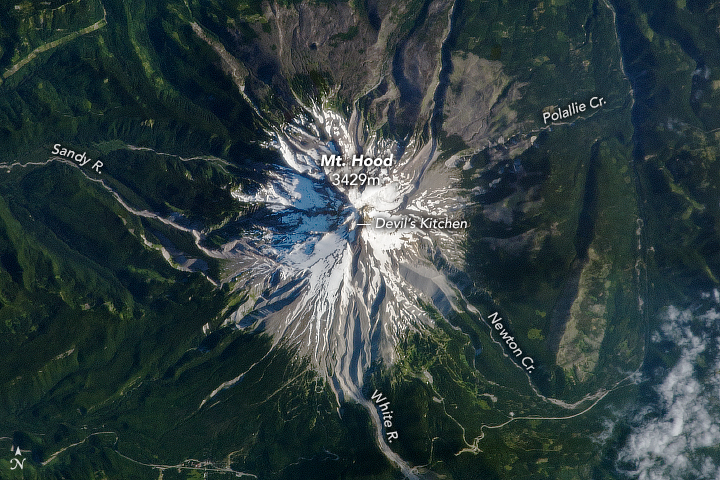 The PCT wraps around some of the most majestic peaks in the U.S. West, including some notable volcanoes. Glacier Peak and Mount Adams show up along the route in Washington. And then there’s Mount Rainier.

By the time thru-hikers reach northern Oregon, they have passed plenty of volcanoes, but they’re not out of the Cascade Arc yet. This is where the trail crosses the flanks of Mt. Hood—the state’s tallest peak. This stratovolcano is shown above from the vantage point of an astronaut on the International Space Station. 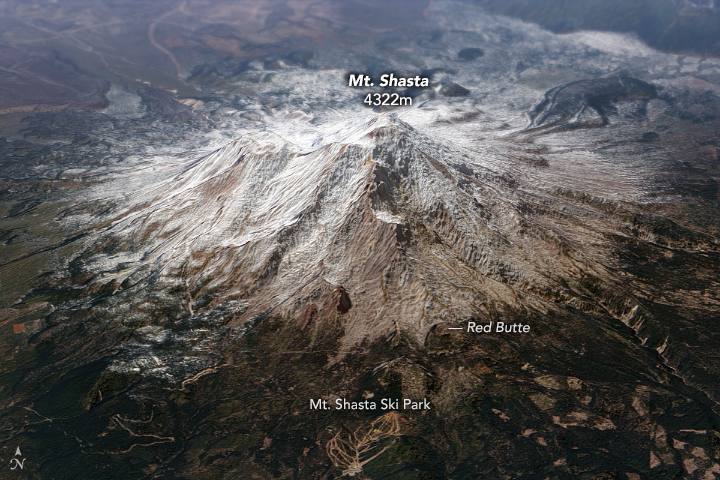 Towering above the horizon at 14,179 feet (4,322 meters), Mount Shasta is sure to catch the eye of hikers. This majestic volcano in Northern California is at least partly visible from the trail for at least 500 miles. The image shows the space-based view of the mountain on November 1, 2013, acquired with the OLI on Landsat 8 and draped over topographic data.

The volcano plays an important role in catching water for the region. Seasonal snowpack replenishes the local water supply that feeds rivers, streams, and nearby Shasta Lake—California’s largest reservoir.

You can see other prominent PCT landmarks, such as Crater Lake, the Three Sisters volcanoes, and even a windfarm, in our full feature story.

Sample some of the most notable locations along the long-distance trail.

High Points of the Sierras

Trails up Mount Whitney and across Forester Pass give hikers access high into the California mountain range.

Towering over the surrounding mountains, Oregon’s second-tallest peak poses a challenge for climbers and satellites.

The tallest mountain of the Cascade Range is a Pacific Northwest icon.