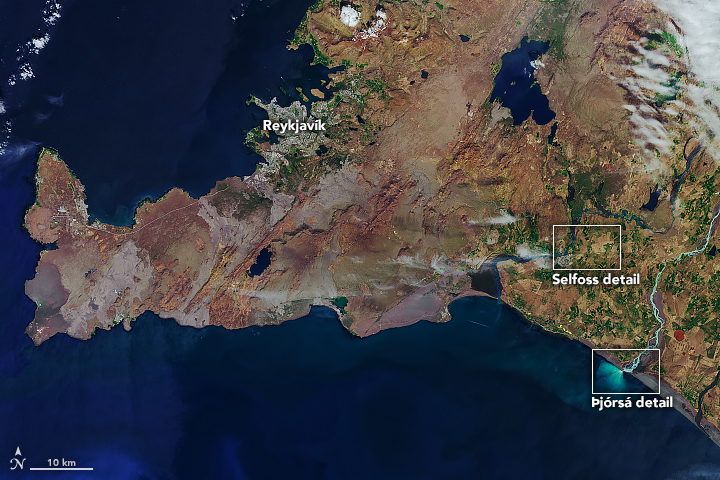 In Iceland, a country rich with compelling geologic phenomena, volcanoes and ice caps abound. Even the country’s rivers are connected to the landscape of fire and ice.

Iceland’s largest rivers by volume, the Þjórsá and Ölfusá, once flowed toward the coast as one river, joining about 25 kilometers from the modern-day coastline. Then about 8,700 years ago they separated when an eruption deposited the Great Þjórsá lava—the country’s largest lava flow. The rivers today run their separate courses, flowing southwest along the east and west sides of the lava flow.

The rivers are visible in these images of southwest Iceland, acquired on June 6, 2019, by the Operational Land Imager (OLI) on Landsat 8. The images show the rivers in the summer season when they are ice-free (in winter they are prone to flooding from ice jams). The wide view (top) shows the river’s locations relative to Reykjavík, Iceland’s capital city. Detailed views (below) show the rivers winding through the modern landscape. 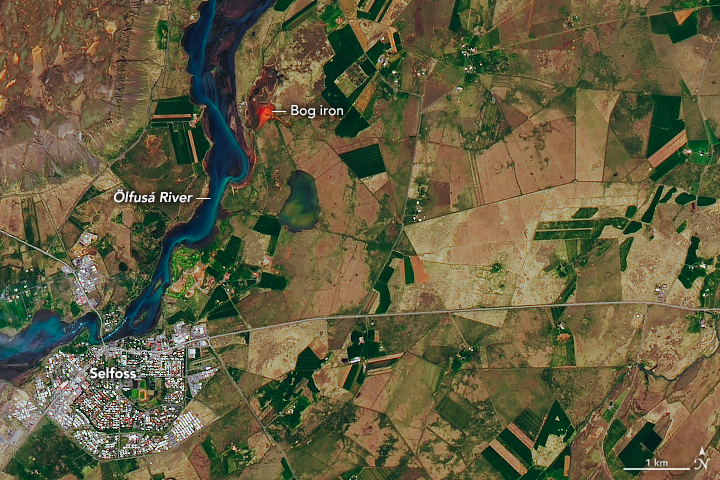 The Ölfusá River is not Iceland’s longest river, measuring only 25 kilometers from its headwaters to the ocean. Yet it moves an average of 423 cubic meters of water per second—more than any other river in the country.

As the river flows by the town of Selfoss, you can see threads of light blue water amid darker areas. Spring water and glacial water feed this part of the river and, given their differences in temperature and density, do not mix well. Dark areas indicate fairly translucent spring water (known as “black rivers” in Iceland). Light blue areas are glacial water, which take on an opaque appearance due to sediments (“glacial flour”) suspended in the water.

The striking red patch on the river’s eastern shore is dissolved ferrous iron, also known as bog iron. According to Emmanuel Pagneux of the University of Iceland, the bog iron reaches the Ölfusá River via ditches that were once built to drain wetlands and convert them into pastures. 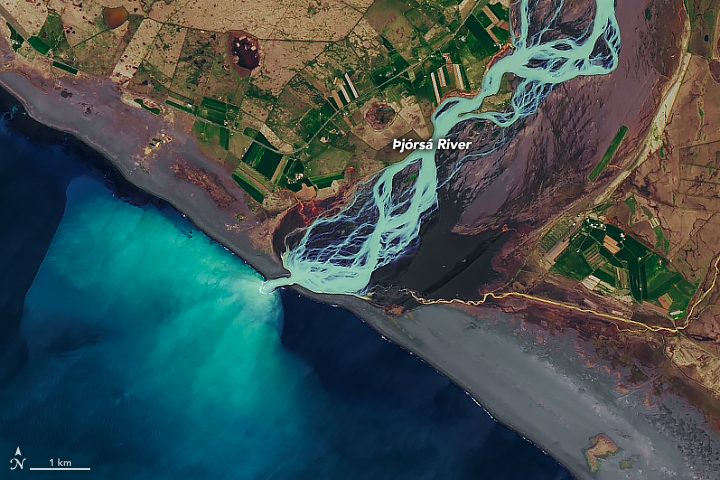 The Þjórsá River is both Iceland’s longest (230 kilometers) and its second-largest by volume, moving an average of 370 cubic meters of water per second. In this view, we see the river where it meets the Atlantic Ocean at the island’s south side.

Before entering the ocean the river becomes braided, as channels of water flow around small, temporary islands of coarse sediment. The dark areas near the river’s mouth are wet volcanic sand.

Where the water enters the ocean, the stark contrast in color is again due to two water types that do not mix well: in this case, glacial water and seawater of differing temperatures and densities.

In a country rich with compelling geologic phenomena, even the rivers are connected to the landscape of fire and ice. 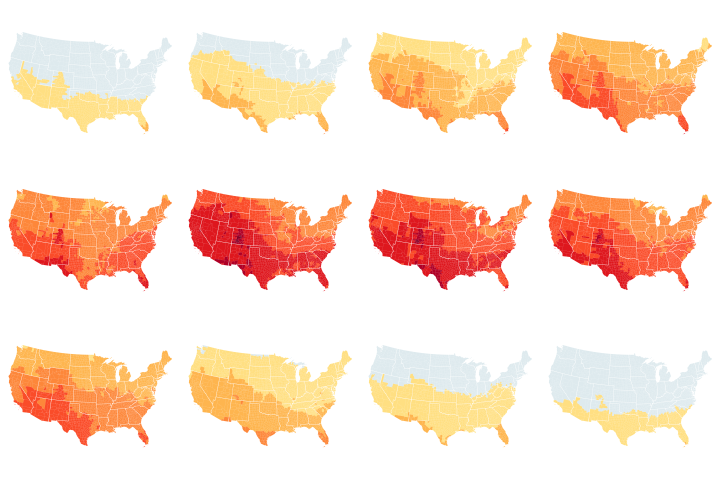 The wide, multi-island zone in the Rio Negro (Black River) shown in this astronaut photograph from September 2, 2006, is one of two, long “archipelagoes” upstream of the city of Manaus (not shown) in central Amazonia. Sixty kilometers of the total 120-kilemeter length of this archipelago appear in this image.

The Water is Wider

A new map of the world’s rivers and their widths shows that surface waterways are collectively wider and cover more area than previously thought.

When Rivers are Borders

A new dataset reveals interesting patterns about where and why rivers define national borders.