How the Smoke Rises 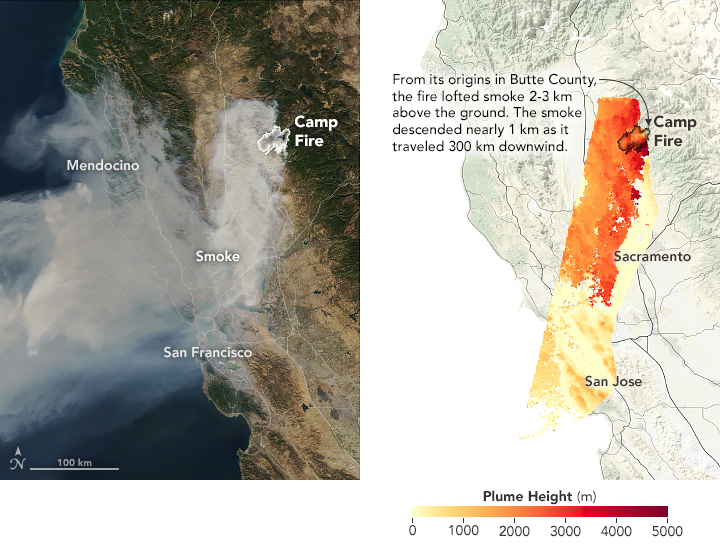 There is only so much that human eyes can detect by looking at a plume of wildfire smoke from space.

The color offers clues about the material burning, and the shape of the plume says something about the intensity of the fire. Oil and house fires, for instance, yield black smoke because these high-temperature fires release a great deal of soot and black carbon. In contrast, forest fire smoke tends to be gray because these lower-temperature blazes release lighter-colored organic matter and brown carbon (wood and vegetation).

The shape of a smoke plume also can tell you something about the fire that produced it. Plumes from the most intense fires billow up into towering thunderclouds. In less intense fires, the smoke lingers in sheets near the surface.

But smoke has plenty of secrets that are opaque to human eyes. How high and far will the smoke go? How does it change as it travels? What are the properties of the tiny particles found within smoke?

Such questions have become increasingly urgent as wildfire seasons have become longer and more intense due to climate change. Such questions felt particularly pressing in 2018, when large fires brought devastation to California and cast smoke palls that lingered for days.

One of NASA’s Earth-observing satellites, Terra, carries the Multi-angle Imaging SpectroRadiometer (MISR), which is particularly useful for deciphering the secrets of smoke. MISR contains nine cameras that are strategically oriented to view Earth at different angles. One points straight down, while the rest are oriented at angles that range from 26 to 70 degrees to the front and back of the satellite. This means MISR takes images of the same smoke plume nine different times as it passes over. Combined with other observations and atmospheric models, the instrument is helping scientists paint a rich picture of what happens after burning begins.

“By taking data at all of these angles, we are able to make use of parallax to estimate the height of plumes,” explained Ralph Kahn, an atmospheric scientist at NASA’s Goddard Space Flight Center. “By looking sideways along multiple paths through smoke and haze in the atmosphere, we also gather important details about how the particles reflect or absorb light, which is key to understanding the amount, size, shape, reflectivity, and other particle properties.”

As the Camp Fire raged in Northern California on November 9, 2018, the Terra satellite passed over and gathered a wide range of data about the smoke plume. As its Moderate Resolution Imaging Spectroradiometer (MODIS) sensor showed a large cloud of smoke drifting from the fire (left top image), MISR’s cameras showed that the plume rose 2 to 3 kilometers in altitude (right top image) over some areas, enough to loft smoke into the free troposphere, where it can spread widely. The plume then descended to about 1 kilometer as it moved south and west and approached the ocean. The chart below shows the height of various smoke features measured by MISR at different distances from the source of the fire.

The nine MISR cameras detected a mix of unusually large and non-spherical particles in the plume right near Paradise, California, likely due to the thousands of buildings burning in the town. Forest fires, such as those burning in the surrounding area, tend to produce smaller, rounder particles.

Some of the greatest scientific advances come not from analyzing a single image or event, but from aggregating data across hundreds or even thousands of smoke plumes imaged by a sensor such as MISR. Members of Kahn’s research group, with help from graduate students at the Jet Propulsion Laboratory, the University of Maryland, and elsewhere, have been working for years to compile a comprehensive database of MISR’s plume height observations. In 2010, Maria Val Martin and colleagues published data on five years of MISR observations over North America; more recently, the group expanded the analysis to include three years of fires all over the world.

They found that a small fraction of North American fires—4 to 12 percent—lofted smoke above the planetary boundary layer into the free troposphere. In North America, such fires were among the largest, and occurred mainly in Canadian and Alaskan boreal forests in the summer. Crop and grass fires—more often found in the lower 48 United States—tended to produce smaller, shorter plumes.

“The altitude at which smoke is injected is critical,” said Val Martin, now an atmospheric scientist at the University of Sheffield. “It determines the lifetime of a pollutant, its downwind path, and the magnitude of its environmental impact. This is the sort of information that is key to warning people about bad smoke events and protecting public health.”

Researchers are also working to include information from MISR into key atmospheric models, many of which lack accurate information about smoke plume heights. “Constraining models to make them as meaningful as possible is a key thing we do with MISR data,” said Kahn. ”If our atmospheric models assimilate real-world data, there is a better chance that we will get accurate information about things like where smoke plumes are headed and where the smoke will affect air quality and people.”

A satellite sensor is helping scientists understand where smoke is headed and what it means for those breathing it.

The height of a wildfire's smoke plume is key to understanding how far it will blow.

With dozens of wildfires burning in a part of Russia best known for its frigid winters, the CALIPSO satellite offered this view through the clouds and smoke.

Fires and Smoke in Russia

This photo-like image from August 4, 2010, shows intense fires burning across central Russia and a thick plume of smoke stretching about 3,000 kilometers (1,860 miles).