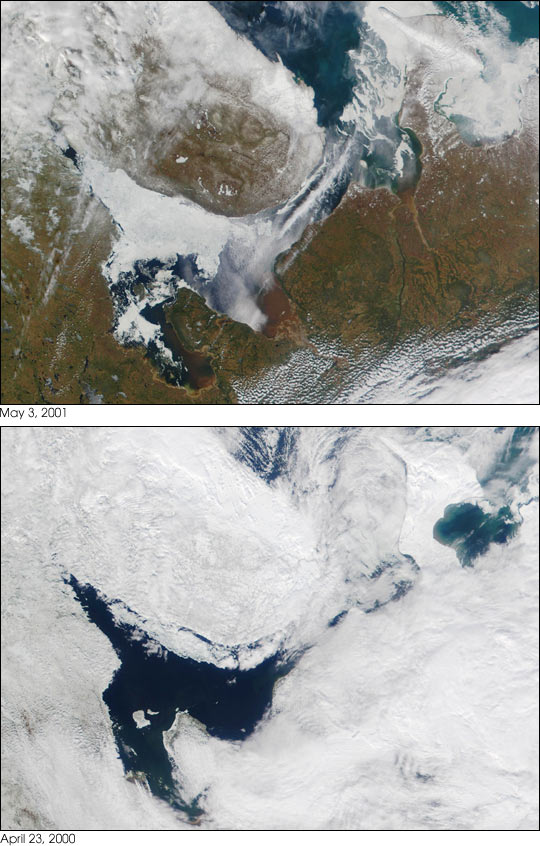 Editor's Note: The caption below, published on May 10, 2001, is incorrect. According to Masha Vorontsova, director of the International Fund for Animal Welfare in Moscow, the situation with the seal pups in the White Sea is normal. There is no disaster and there never was. For more details, refer to the article entitled "No Danger" on the New Scientist home page. The Earth Observatory regrets the earlier errant report.

Original Caption
According to the Russian Polar Research Institute for Fisheries and Oceanography, between 250,000 and 300,000 Greenland seal pups face death by starvation over the next two months due to a cruel trick by mother nature. The seals, most of them less than two months old, are trapped on ice sheets that remain locked in the White Sea, located near Archangel in Northern Russia. Typically, during the spring thaw the ice sheets break up and flow with the currents northward into the Barents Sea, the seals' spring feeding grounds. The seal pups hitch a ride on the ice floes, living on food caught by their mothers until they arrive in the Barents Sea. Unfortunately, their mothers departed for the Barents Sea weeks ago leaving the pups with only their own individual stores of fat to sustain them.

In a normal year, the seal pups' trip from the White Sea out to the Barents takes about six weeks, and the seals have adapted to rely upon this mechanism of mother nature. During their yearly migration, the mother seals usually stay with their pups and feed them until their pelts turn from white to grey--a sign that the pups are mature enough to swim and feed themselves. Unfortunately, this year unusually strong northerly winds created a bottleneck of ice near the mouth of the White Sea, thus blocking the flow of ice and trapping the pups.

These true-color images of the White Sea were acquired by the Moderate-resolution Imaging Spectroradiometer (MODIS), flying aboard NASA's Terra spacecraft. The top image, taken May 3, 2001, shows the large ice shelf still trapped in the White Sea. The bottom image was taken by MODIS almost this same time last year (April 23, 2000). Notice there was much less ice in the White Sea this time last year as most of it was en route to the Barents Sea.

Sea ice formed delicate swirls of blue and white in the Sea of Okhotsk in February 2009.

A combination of winds and currents steered sea ice into interlocking swirls.

Summer brought melting swirls of sea ice to the southeastern coast of Greenland.

The Sea of Okhotsk is the lowest latitude area where sea ice forms each winter.