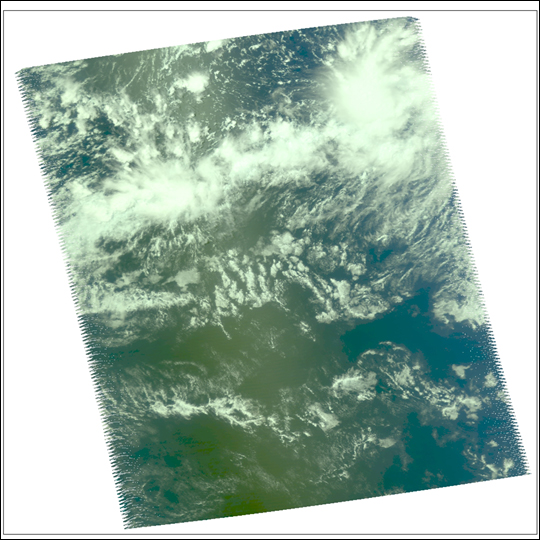 The image above shows Tropical Depression 5E on July 26 before it evolved into Tropical Storm Darby. This daylight image was made with the visible sensor in the AIRS instrument suite. Located in the eastern north Pacific Ocean off the coast of Mexico, Darby is in the upper right-hand corner. Circulation is not apparent because the storm was not organized sufficiently to allow the nascent eye to appear. At this time, winds were approximately 35 mph. In the early morning of July 28th, Darby was upgraded to hurricane status.

The major contribution to radiation (infrared light) that AIRS infrared channels sense comes from different levels in the atmosphere, depending upon the channel wavelength. To create the movies, a set of AIRS infrared channels were selected which probe the atmosphere at progressively deeper levels. If there were no clouds, the color in each frame would be nearly uniform until the Earth's surface is encountered. The tropospheric air temperature warms at a rate of 6 K (about 11 F) for each kilometer of descent toward the surface. Thus the colors would gradually change from cold to warm as the movie progresses.

Clouds block the infrared radiation. Thus wherever there are clouds we can penetrate no deeper in infrared. The color remains fixed as the movie progresses, for that area of the image is "stuck" to the cloud top temperature. The coldest temperatures around 220 K (about -65 F) come from altitudes of about 10 miles.

We therefore see in a 'surface channel' at the end of the movie, signals from clouds as cold as 220 K and from Earth's surface at 310 K (about 100 F). The very coldest clouds are seen in deep convection thunderstorms over land.

The MODIS instument onboard NASA's Aqua satellite captured this tue-color image of a rapidly intensifying Hurricane Darby in the eastern Pacific Ocean.