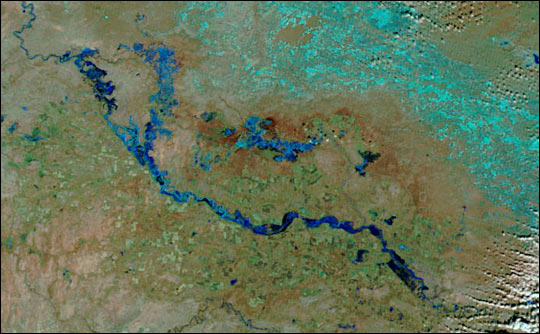 Winter ice and a failure to observe regional water use agreements trigged floods along the mighty Syr Darya River in Southern Kazakhstan. At least 200 families living in communities around Qyzylorda, shown here, were forced to evacuate when the river burst its banks.

The Syr Darya is an important resource in Central Asia, providing water for farming and hydroelectric power. In early January, representatives from Kazakhstan, Kyrgyzstan and Uzbekistan met to plan water usage to prevent regional flooding. In early February, Kyrgystan sent a higher volume of water than agreed from its hydroelectric power station into the Chardara Reservoir on the border of the three countries. Uzbekistan had agreed to accept extra water in its Arnasay Reservoir, located just west of the Chardara, but did not take as much as required. As a result, the Chardara filled, and Kazak officials sent the extra water down the Syr Darya River. The River, already constricted by ice, could not take the extra water and overflowed.

This Moderate Resolution Imaging Spectroradiometer (MODIS) image shows the flooded area as seen by the Terra satellite on February 10, 2004. Ice, which is light blue in this false-color image, lines sections of the River’s original channel. The flood water, a darker shade of blue, expands around the ice-defined banks of the River. Clouds in this image are light blue and white, vegetation is green, and bare soil is pink.

The high-resolution image provided above is at MODIS’ maximum resolution of 250 meters per pixel. The image is available in additional resolutions and in true color.

Floods on the Yellow River

Acquired on July 18 and August 1, 2009, these false-color images provide a before-and-after view of the Sitamarhi District of the Indian state of Bihar. The image from August 1 shows swollen waterways and large areas of standing water.